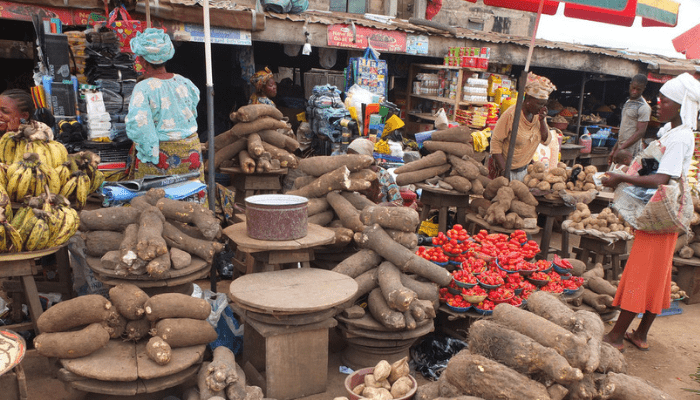 Nigerians cannot afford to buy as much as they used to as food inflation is now at the highest in over 12 years, heaping financial pressure on households already faced with a shrinking labour market and a stagnant economy at a time of mounting insecurity.

Inflation, in double digits since 2016, reached 18.17 percent in March, according to the consumer price index/ inflation report released by the National Bureau of Statistics (NBS) on Thursday.

This signals a decline in purchasing power of Nigerians as prices of goods and services are skyrocketing without a corresponding increase in income, making life miserable for the country’s large population.

The March figure is the highest since January 2017 when it climbed 18.72 percent. The economy was in a slump then and is teetering on the brink of recession now, having expanded just 0.11 percent in the fourth quarter.

“Nineteen straight months of rising inflation rate and momentum is not even slowing. Looks like we are going to break the 2017 record in Q2,” Omotola Abimbola, assistant vice president at Chapel Hill Nigeria tweeted on Thursday.

Food prices, which make up the bulk of the inflation basket, rose 22.95 percent, the highest since 2009 when NBS started publishing monthly food inflation.

The NBS report noted that the rise in March 2021 food index was caused by increases in prices of bread and cereals, potatoes, yam and other tubers, meat, vegetable, fish, oils and fats and fruits.

“Nigeria must fix the insecurity situation in various parts of the country if it wants to drive down food prices,” Gloria Fadipe, head of research at securities trading firm, CSL Stockbrokers, said. “It will also need to manage FX issues properly to allow for cheap imports as opposed to manufacturers going to the black market to get dollars costly,” she explained.

In a country plagued by insecurity following a wave of kidnappings of schoolchildren in its increasingly lawless north, there are concerns that the “stagflation” combination of rising unemployment and prices and low growth could trigger significant social unrest.

Bismarck Rewane, managing director at Lagos-based Financial Derivatives, said the “stagflation crisis” would take a long time to resolve, with inflation eating up economic gains to the point where any government stimulus might be too weak to generate jobs.

President Muhammadu Buhari has made investment in rail and road a focus of his administration’s drive to kick-start growth, but falls in public revenue linked to the lower oil price have checked his ambitions.

Given the low-growth and high-inflation backdrop, few analysts expect the Central Bank of Nigeria to either raise or lower its base rate of 11.5 percent when it holds its next policy meeting.

The rise in commodity prices has continued at a time when the incomes of Nigerians have been badly affected by the economic impact of the pandemic.

The resultant effect of this has continued to worsen the number of the country’s poor, widen the inequality gap, and in turn deter economic growth.

Before the pandemic struck last year, Africa’s biggest economy was wallowing in multidimensional poverty. Data from the World Poverty Clock reveal that six people fall into extreme poverty in Nigeria every minute. More so, a 2018 report by the Brookings Institution situated the country as the poverty capital of the world with 87 million people or roughly 40 percent of Nigeria’s 200 million population living below $1.9 a day.

To put it in perspective, this total number of poor people in Nigeria exceeds the entire German population. The United Nations expects Nigeria’s population to double to 410 million by 2050, potentially swelling the ranks of the poor.

With inflation soaring to 18.17 percent alongside the high rate of unemployment, Nigeria’s misery index, an index that helps to determine how the average citizen is doing economically, worsened to 50 percent, the highest among peers.

More Nigerians have been forced to reduce food consumption as prices skyrocket in the wake of falling income.