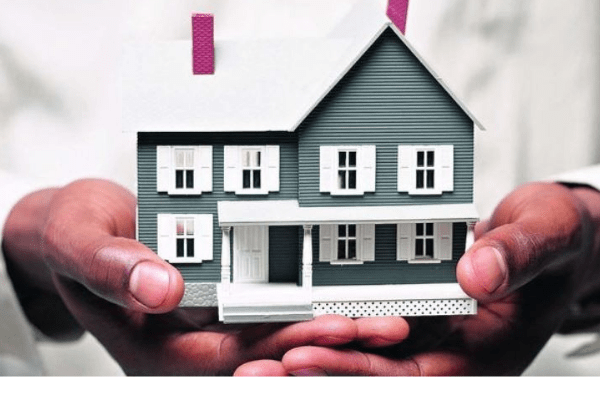 Over time, there have been serious discussions around the different initiatives to bridge the housing deficit which experts have estimated be no fewer than 20 million housing units. Yet, housing provision is still in its decrepit state. The effort of the minister of power, works and housing in respect to creating affordable housing units with a view to bridging the housing gap has not really addressed the challenge in the sector.

Basically, after some insights gathered about the state of housing in Nigeria by BusinessDay Research and Intelligence Unit (BRIU), our observations show that the current challenges facing affordable housing are complex, and overcoming them successfully requires innovation and cooperation between multiple sectors and stakeholders.
In bridging the housing deficit, a lot of factors need to be addressed as growth in that space will only but experience a sluggish growth based on the constraints plaguing the sector. To address the housing gap, it is imperative that policy makers and key stakeholders collaborate on simplifying the finance structures for housing loans.

So far, housing loan has been the major impediment that slows the pace of housing development, and it is so worrisome to note that the housing finance structure is motionless and extraneous in drive towards housing delivery in Nigeria. However, challenges exist along the entire housing value chain, and each construction in the system impacts on the availability of finance.

Recuperating the flow of finance for housing requires improvements along the value chain – some of which broaden outside of the housing finance sector. A weak value chain discourages investors, hence investor sought for other sectors to invest on. Consequently, the government does not have the capacity to invest in housing development or creation on its own, hence there should be an enabling environment set aside to attract and sustain the interest of investors geared towards creating affordable housing unit for the citizenry, even as in recent times, there had been an improvement in the housing space through different intervention from the key stakeholders and government to bridge the housing gap.

The introduction of the National Housing Fund (NHF) is one of the initiatives that give hope that the Federal Mortgage Bank of Nigeria (FMBN) is ready to live up to its billings as one of the sources of single digit funds for an interested obligor. But then, the NHF has not achieved its full potentials as it has been confirmed to be insufficient to leverage on addressing housing deficit.

The number of contributors to the National Housing Fund (NHF) has been relatively small compared with the total number of the labour force. The participation from both private and public sectors is still low as most organizations are presently not participating in the NHF 2.5 per cent monthly contribution, thus funds available for loans are not adequate to meet the housing need.

Also, increasing population growth is another factor that has contributed to the shortage of housing units in Nigeria. As the Nigeria’s population keeps increasing exponentially, it exerts substantial level of pressure on the available housing stock which invariably leads to higher demand of housing units. Another factor that affects effective demand is the unwillingness of the banks and other financial institutions to lend mortgages to individuals. 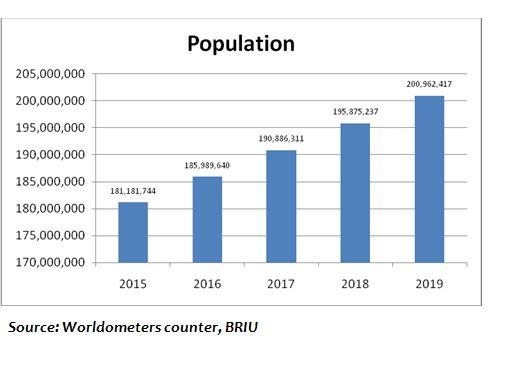 Nigeria’s population has continued to grow at an increasing rate. Based on figures available figure, Nigeria’s population figure will increase by 2.60 per cent to 200.9 million individuals in March 2019 and it is further projected to increase further by 2.62 per cent in 2020 at 3 per cent annual growth rate. The increment in population puts further pressure on the available housing stock and putting in population measures could be very difficult and most times unachievable in a country like ours. 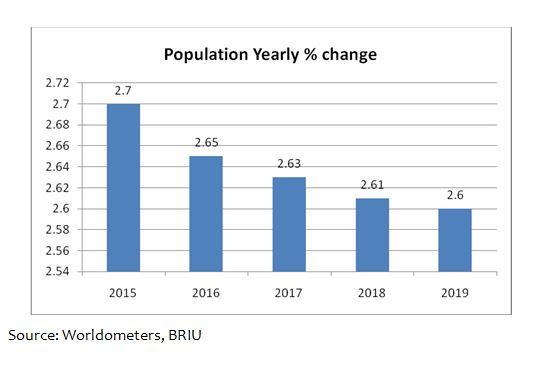 It is worthy to note that; there is a direct relationship between population and housing stock; conversely, if one increase there should be a corresponding increase viz-a-viz the other. More so there has been a slight percentage change in the yearly population of Nigeria which is expected to increase slightly in 2020 by 2 point bases to 2.62 per cent

Studies show that macroeconomic environment has direct influence on the property return and the interaction between macro economy and residential property market indicates that the Gross Domestic Product (GDP), inflation, interest and exchange rates are the major macro economic factors that influence property returns. The quality and quantities of the country’s housing stock is a measure of the country’s economic growth and prosperity. Also real estate sector has become a focal point of government fiscal and monetary policies and used as yardstick for realizing low level inflation, high level of employment, low level of unemployment and balanced economic growth. 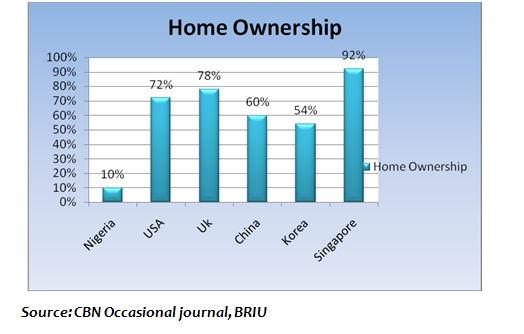 Industry experts argue that Nigerian home ownership which is gauged at 10 per cent is as a result of lack of healthy mortgage financing system in the country.