...Says power tariffs must be service-reflective 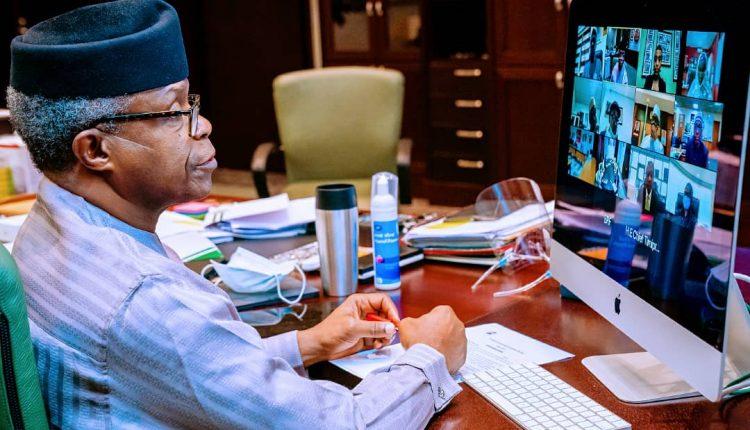 Vice President Yemi Osinbajo on Tuesday said Nigeria is repositioning its economy to benefit from the intra-Commonwealth trade projected to rise from an estimated $1 trillion this year to $2.75 trillion by 2030.

This is just as the government, through various policies, is resetting the economy disrupted by the global coronavirus pandemic.

Osinbajo, speaking in Abuja on Tuesday at a webinar organised by the Commonwealth Enterprise and Investment Council (CWEIC), with its focus on Nigeria, said government, as part of its response had taken the opportunity to remove petrol subsidies and to insist that “power distribution companies must engage with customers to ensure that new tariffs are based only on improved power supply. We are talking of service reflective tariffs”.

The vice president, who noted that the African Continental Free Trade Area (AfCFTA) is pertinent, added that “so certainly is also trade with our Commonwealth partners, including the United Kingdom”.

“This was indeed evident from Nigeria’s participation in the UK-Africa Investment Forum held earlier this year.

“It is not news of course that the COVID-19 pandemic has distorted international trade with disruption of global value chains, export bans, and protectionist policies. On our part, Nigeria remains committed to the multilateral trade system but we will ensure that our economy is not subjected to unfair trade practices,” he said.

Osinbajo said Nigeria is seen as ‘Africa’s Gateway Economy’, as the continent’s most populous nation and its largest economy, and as such the country can leverage its geographical location, which is right in the middle of far-flung Commonwealth countries.

“We are poised to catalyse intra-Commonwealth trade. Our investments in fast-growing sectors and infrastructure, power, rail, roads and several other areas especially technology where we think we can benefit from other Commonwealth countries,” he said

President Muhammadu Buhari had in the wake of the COVID-19 pandemic seized the opportunity to reset Nigeria’s economy creating the Economic Sustainability Plan, a plan that will run for the next 12 months to avoid a deep and prolonged recession by supporting businesses and households and address long-term structural vulnerabilities.

“Taking into account our economic size and fiscal limitations, we have put together a stimulus package of N2.3trillion, which is just over 1.5% of national income, if other factors like the price of oil and length of the COVID-19 pandemic do not worsen further, these interventions should ameliorate the situation with a mild recession expected of minus 0.59%,” Osinbajo said.

He added that the Central Bank of Nigeria is also committing to moving to a unified exchange rate, to improve certainty in trade and investment.

“In addition to using fiscal and monetary measures to stimulate the economy, our main objectives are to retain and create jobs, to assist vulnerable people, support businesses and undertake infrastructural investments.

“I am happy to see from the research that jobs, retaining jobs and creating more opportunities tops Nigerians’ priorities when it comes to what they believe the COVID-19 response should be like,” he said.

Other key interventions highlighted by the Vice President include, Jobs for Food which is an agricultural programme aimed at expanding the acreage under cultivation across the country, to create, we hope, hundreds of thousands of jobs and we also intend to guarantee uptake processors, aggregators and to some extent, by government.

“We also have a Jobs through Homes programme which is a programme to provide jobs and increase our national housing stock, at the same time by a massive social housing programme where we intend to engage young professionals and artisans who are involved at the moment, in small businesses, building and using local products such as cements, doors, tiles, windows and paint.

“We also have a Solar Homes Systems Programme where we intend to engage private solar power companies who will be able to access cheap loans to provide modular solar-powered units to about 5 million households which will roughly translate to serve 25 million people in rural or under-served areas. At the moment, we have about 40million homes without power. So, we expect that this will be a major dent in that deficit,”he said.

He noted that the scale required means that Nigeria will be encouraging suppliers to establish production facilities in the country, adding that “we expect to be able to attract solar companies to establish manufacturing and assembly plants in Nigeria.
“We are also looking at the Future of Jobs programme in technology taking into account the ‘new normalʼ, our creative and significant youth population and the need to prepare our economy to be an outsourcing hub, providing services across the whole gamut of possible technology engagements, including animation, software engineering and data analysis.

“These are areas where we have invested considerably already and we intend to do a bit more and we hope that some of the efforts we put into the response will address these areas even more pointedly.

He narrated how government increased the number of modular laboratories that can handle COVID-19 samples from 5 at the onset of the pandemic to 39 today.

“While we are bullish on promoting local production, we remain committed to engaging with our traditional trading partners. This is in recognition of the potential contribution of trade to growth.”