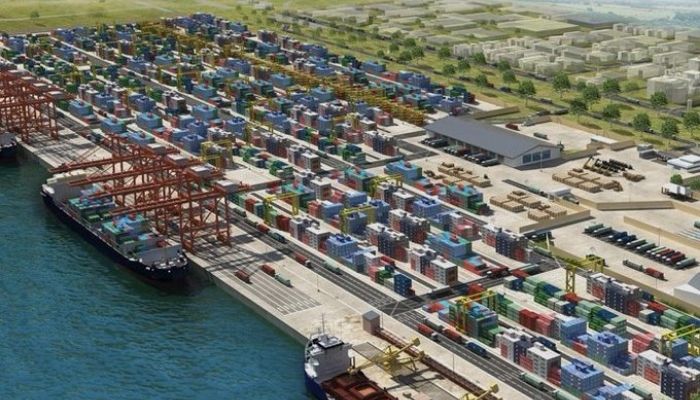 Tolaram Group, the parent company of the Lekki Port LFTZ Enterprise Limited, has successfully concluded negotiation and will be signing off a US$629 million loan facility agreement with China Development Bank (CDB) for the construction of the Lekki Deep Seaport, BusinessDay has learned.

This, according to a source close to the Group, is a major step towards the financial close on the funding for the construction of Nigeria’s first deep seaport project, estimated to gulp over $1.6 billion.

According to the source, this loan facility would enhance massive construction work at the site and would also ensure timely completion of the port project, which has gone far with the ongoing construction of breakwaters at the port site.

Lekki deep seaport is jointly owned and developed by the Tolaram Group, the Nigerian Ports Authority (NPA) and the Lagos State Government as equity investors.

Tolaram, which has the concession to build and operate the port for 45 years, appointed the China Harbour Engineering Company (CHEC), the world’s biggest marine engineering company, as the Engineering, Procurement, and Construction (EPC) contractor to oversee the design, construction and commissioning of the port project under the supervision of an American project management consultant known as Louis Berger Group.

“This is a real game-changer for us, doing project financing of this scale, it is not easy to raise money for a factory-you need $30 million, $50 million. But you want to raise $800 million? That’s a whole different ballgame,” Haresh Aswani, Tolaram’s managing director for Africa, told Financial Times on Tuesday.

The Lekki Deep Seaport, Financial Times said, will help in solving one of Nigeria’s export problems and will be financed with $630 million from the China Development Bank, and $470 million in equity from the state-owned China Harbour Engineering Company, which has a 52.5 percent stake and will be responsible for building the port.

This leaves Tolaram group that ought to be the majority shareholder, to own 22.5 percent, the Nigerian Ports Authority 5 percent and Lagos State Government 20 percent of the port project.

Authenticating this, Sekonte Davies, executive director, Marine and Operations of the NPA, disclosed at a stakeholders meeting in Apapa recently, that promoters of the Lekki Port project, which is supposed to have concluded the financial closure of the port project on 21st of September 2019, shifted the date to 21st of October, 2019.

However, the source familiar with the port project confirmed to BusinessDay that the loan will be signed off on Wednesday, October 23, 2019.

He said that upon completion, the port would help shippers to achieve economy of scale in shipping, which requires a larger vessel to lower the cost of freight per Twenty-foot Equivalent Units (TEUs) that comes to Nigeria.

“Shipping companies are building bigger vessels and the draft needs to be bigger as well to accommodate them,” he added.

It was proposed that the multi-purpose port would cover an area of 90 hectares with three container berths, long dry bulk berths, and three liquid berths. Initially, the port would handle close to 1.5 million Twenty-foot Equivalent Units (TEUs) of containers annually, and this would be upgraded to 2.5 million TEUs in the future.

The channel would be dredged to 14 meters depth, which would be deepened to 19 meters as traffic grows while the breakwater, which protects the vessels from the waves, is 1.5 kilometres long.