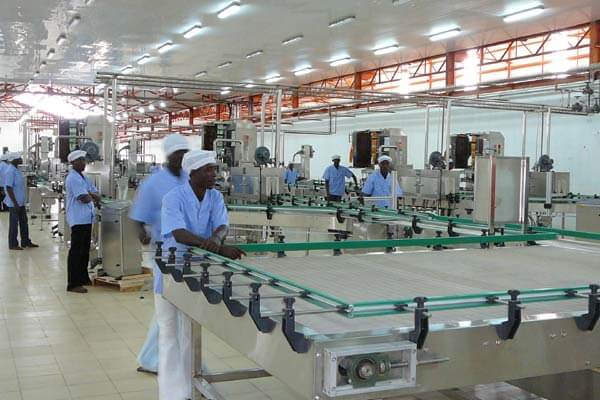 Industrialisation plays a pivotal role in the building of a nation, hence acts as a catalyst that accelerates the velocity of structural revolution and diversification of the economy, enabling the country to fully utilize its factor endowment.

Although, different administrations have adopted different political and economic policies in an attempt to diversify the economy, the questions are: have all these policies propelled Nigeria to attain its potential? What is the present state of the Nigerian industrial sector and what impact have these policies had in improving the economic outlook of the nation at large? These are the few questions that run through the minds concerned Nigerians in an effort to analyze the feat of the industrial sector and their contributions to the development of the country.

Performance and structure of industry 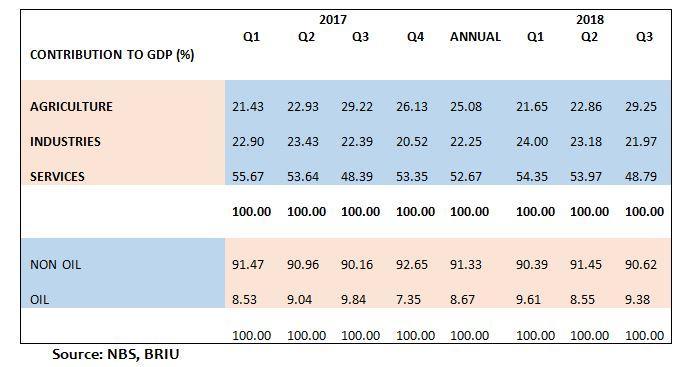 According to the information gathered from the Central Bank of Nigeria’s (CBN) Economic Report for 2018, the report shows that the agricultural sector gained more momentum in the third quarter of 2018 and the boost in agricultural productivity was attributed to adequate rainfall recorded across the country. The improved productivity was despite some instances of flooding in some states which affected the level of farm produce, farmer/herdsmen clashes, among others.

More so, production in the industrial sector recorded an impressive feat during the third quarter of 2018. This improvement can be seen in terms of industry expansion, more employment generations leading the engagement of the unemployed citizenry to meaningful activities. This industrial improvement re-writes the narratives of industrial production with higher output and new orders in the manufacturing sub-sector. 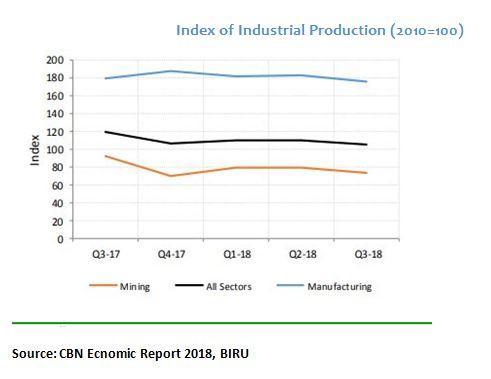 Subsequently, manufacturing production index was gauged at 176.1 percent in third quarter of 2018. However, the industry recorded an additional increase of 0.1 per cent on quarter on quarter basis. The improvement was due to increased production activities on account of new orders and lower input prices.

Capacity utilisation in the sub-sector remained at 54.6 per cent in Q3 2018, same as in the preceding quarter as shown in the CBN Economic report 2018, while 73.7percent was the estimated index for the mining sector in the third quarter of 2018. Howeever, there was a decrease by 0.4 per cent which was below what it was as at the end of June 2018. The slide in the mining sub sectoral activities was as a result of the decline in the crude oil and gas production.

Energy generation improved during the review quarter. At 3,358.0 mw/h, the industry hit its peak as the highest daily production of electricity in July 2018 amounted to 89,077Mwh. Also, the average approximated electricity generation rose by 3.32 per cent when compared wih the level as at the end of the second quarter of 2018. It is fascinating to know that the improvement recorded in the electricty generation sub sector was as a result of adequate gas supply to thermal plants and higher water level at the nation’s hydro stations. This improvement could also be attributed to the fact that there was an increase generation capability after maintance and repair of plants. 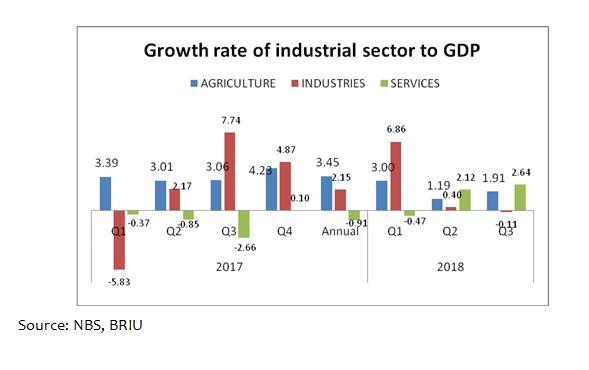 The agricultural sector comprises four sub activities, which include: crop production, livestock, forestry and fishing. The agric sector posted 4.23 percent growth in Q4 2017; 3 percent in Q1 2018, a paltry 1.19 percent in Q2 2018, and 1.91 percent in Q3 2018. However, the inconsistency was due to the performance of the other sub sectors apart from crop production. In effect, crop production remains the major driver of the sector as it accounted for 91.1 per cent of the sectoral nominal Gross Domestic Product (GDP) in 2018. Overall, the agricultural sector contributed 25.52 per cent to nominal GDP as at the end of the third quarter of 2018 which was higher than the rate at the end of the third quarter of 2017 as shown in figures provided by the National Bureau of Statistic (NBS) GDP report for third quarter of 2018.

COVID-19: Easing of dine-in restrictions may bring only little respite to restaurants