You need to active Javascript on your
Economy

How Nigeria can lift more people out of poverty

Income inequality broadly refers to an extreme disparity of income distribution with a high concentration of income usually in the hands of a small percentage of a population. The obvious gap between the rich and the poor is peculiar to developed and developing countries alike. However, there are huge disparities in how people experience poverty, it could be in the form of health, education and standard of living.

Findings from the 2019 Global Multidimensional Poverty Index (MPI) shed more light on the disparities in how people experience poverty, revealing vast inequalities among countries and among the poor themselves.

The irony of the Nigeria situation is that as the country gets richer only a few benefits while the major share of the population suffers from poverty and deprivation.

In Nigeria, the proportion of people who are multidimensionally poor has remained constant at over 50 per cent since the past decades. The income of the nation has grown marginally since the country crept out of recession in 2016. However, the average wealth of the populace for the past 50 years and more has not grown equally among all the groups.

The country’s inequality has reached an extreme level, albeit being the largest economy in Africa and 30th in the world, according to the World Bank ranking, which was measured using the (GDP) as a key yardstick.

The country’s economic diversification and strong growth, sadly, however, not much of that optimism has translated into the daily life of average Nigerian. 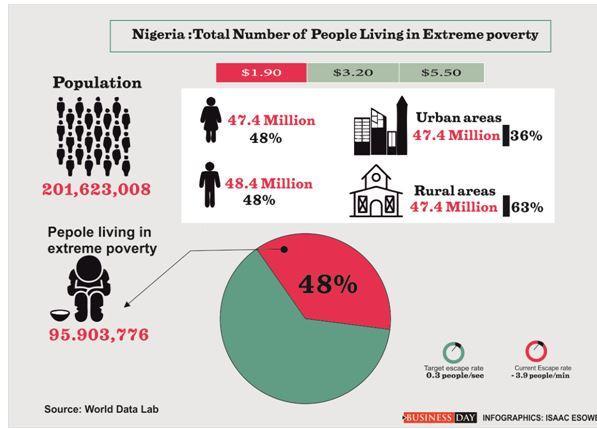 Poverty and inequality in Nigeria have a strong spatial dimension. Poverty is considerably higher in rural than in urban areas: 35.5 per cent of the urban population live below the national poverty line in 2020, compared to 63.1 per cent of the rural population.

Poverty and inequality in Nigeria are not due to lack of resources, but to the ill-use, misallocation and misappropriation of such resources. At the root, there is a culture of corruption and rent-seeking combined with a political elite out of touch with the daily struggles of average Nigerians. The irony of the Nigeria situation is that as the country gets richer only a few benefits while the major share of the population suffers from poverty and deprivation.

BusinessDay Research and Intelligence Unit (BRIU) found out that poverty in Nigeria is particularly outrageous because it has been growing in the context of an expanding economy where the benefits have been enjoyed only by few individuals.

The inequality gap that characterizes the nation is such that the amount of money that the richest Nigerian man can earn annually from his wealth is sufficient to lift 2 million people or more out of poverty for one year.

Across the states in Nigeria, poverty finds expression in the following states according to the latest publication on National Poverty Rates for Nigeria: 2003-04 which was revised 2009-10 by the National Bureau of Statistics (NBS). This was captured using the following parameters – Absolute Poverty Approach, Relative Poverty Approach and Dollar per day.

An increasing poverty level will variably translate into high crime rate. A report published by the National Bureau of Statistics (NBS) has shown that rising inequality has the tendency to push people to commit crimes. In recent past, the Nigerian crime rate stood at 68.23 per cent which was higher than the threshold of 63.94 and Safety Index of 36.06 per cent.

Based on the rising level of inequality and poverty, much still needs to be done to lift the poor people from the bottom of the social pyramid to the middle-class strata. Bridging the inequality gap entails providing a means for the poor to access opportunities that will enable them to break free from the circle of intergenerational poverty and to do this requires providing basic infrastructure like power, water, access to basic health care and educational facilities, among others

Secondly, the government’s programme of Conditional Cash Transfer (CCT) and access to cheap loans by artisans and traders will help to alleviate poverty and bridge the inequality gap. But the effect will be significant by better complementing it with far-reaching socio-political, economic and institutional reforms and also taking into cognizance, the impact of policies on the poorest poor.

The tax system is highly dysfunctional because the rich are not been taxed enough and our redistribution system needs to be fixed too. The idea of bridging inequality in whatever guise (economic, social, political etc) entails not just taking from the rich to give to the poor but ensuring the rule of law prevails too.

That Nigeria will join the world’s climate change campaign train

Breaking the spirit of the public service: Yewande Sadiku and her traducers