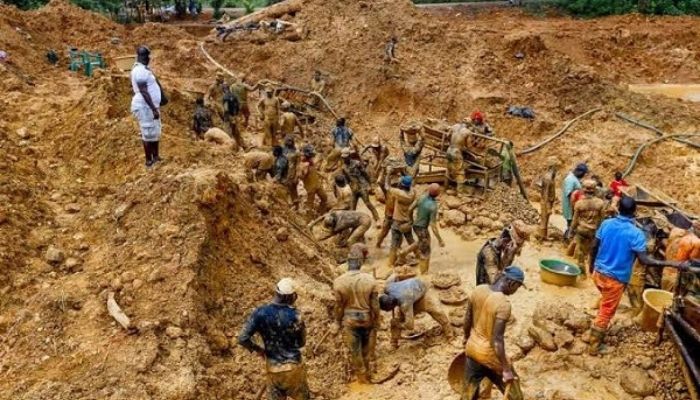 The Nigerian government is losing billions of dollars to illegal mining activities in the country’s solid minerals sector as corruption continues to hold sway.

The Federal Government has often expressed keenness to develop the sector in order to diversify the economy by increasing its contribution to the Gross Domestic Product (GDP), exports and foreign reserves.

The Nigeria Extractive Industries Transparency Initiative (NEITI) had in 2019 said the sector’s contribution to the GDP was only a paltry 0.5 percent, compared to over 12.1 percent in the 1970s.

In contrast, the mining sector contributes much more to the national economy in countries such as Botswana, Ghana and South Africa at 16 percent, 12.6 percent and 7.3 percent respectively.

A 2019 Columbia University Capstone report said to achieve its goal, “the government initially tried to attract FDI and multinational corporations into the Nigerian mining sector. It redefined its role from owner-operator to administrator-regulator.”

“Yet, investments did not pour in from abroad. Despite high commodity prices and a concerted effort by the government, not a single major mining company invested in Nigeria and only a few junior companies did. Foreign investors and companies continue to perceive the market as unsafe and challenging,” it added.

The country’s Minister of State for Mines and Steel, Uche Ogar, admitted in 2021 that Nigeria lost over $5 billion through illegal smuggling of gold between 2012 and 2018.

According to the National Bureau of Statistics (NBS), over $9 billion is lost every other year as a result of illegal mining activities in the country.

Last year, market researchers at CSL Stockbrokers warned that illegal mining activities had continued to wipe gains in the sector.

They said, “Despite the endowment of mineral resources in Nigeria, the solid minerals sector has significantly underperformed with a meagre contribution of less than one percent to the GDP over the years.

This is where Nigeria’s mining problem lies. Nigerians, noted the Capstone report, have practised informal artisanal mining for centuries.

It said, “Today, the activity is largely poverty-driven and supports the livelihoods of at least 500,000 people. Partly due to its informality, artisanal mining is associated with many negative externalities such as environmental degradation, crime and health hazards.

“One tragic example is the 2010 lead poisoning outbreak in Nigeria’s northwestern Zamfara State, which killed approximately 400 children and has affected thousands more.”

“It reveals the prevailing socio-economic problems in the region, especially the inadequate responses to poverty and poor service delivery by the state,” he added.

“It is a sectoral landscape characterised by extreme corruption,” an official of the Mining Cadastre Office in Abuja, the country’s capital, told BusinessDay.

The Mining Cadastral Office is responsible for the issuance of mining titles/rights. It is also responsible for the promotion of private sector investment in the solid minerals sector, the improvement of the investment climate in the sector and attraction of foreign investors as well as the generation of appropriate revenue for the government.

Outside the premises of the organisation in Lobito Crescent, a coterie of mostly young men parade around. “They are touts who help people to get mining titles, get coordinates and any information you might want from the Cadastre Office. It is easier and more efficient to deal with them than to deal with the officials of my office,” the official said.

One of them, who simply identified himself as Paulson, told BusinessDay, “We work with officials of the Mining Cadastre Office.

“I am a businessman. If you want a mining site for gold, I can get you a correct site. What we do is: we lock down lucrative sites on the cadastral system and make them unavailable. We then market these sites to interested big miners. They are mainly Chinese.”

From the Mining Cadastre Office, where the mining permits are received, the corruption moves to the actual mining sites themselves. It is here that billions of dollars of royalties and taxes due to the nation’s treasury go missing.

In Niger State, massive illegal mining operations of gold, lead, zinc and tantalite are carried out at the Federal Government College Minna and across various areas of the state, with little in remittances to the government. At their peak in 2017, these mines in Niger employed as many as 600,000 people. Miners and mining firms in Plateau and Bauchi states excavate large quantities of tin, dolomite, barites and zinc, and pay little or nothing as royalties and taxes.

Ogbonna said in 2020 that “an estimated 80 percent of mining in the North West region is carried out illegally and on an artisanal basis by local populations.”

“The mining of large untapped mineral deposits in the area, especially gold, which has strategic importance and economic value, is at the root of community violence,” he said.

In Ondo and the some other parts of the South-West, gold mining by Chinese-owned companies and artisanal miners are expanding rapidly, shrinking the available space for farming.

In all these areas and across the country, federal mining officers work hand in hand with Chinese and Nigerian mining companies to defraud the government.

“It is the Resident Mining Officers in the states that collude with miners to ensure that illegal and unaccountable mining continue,” a miner and representative of one of the biggest Chinese miners in the Southwest told BusinessDay on condition of anonymity.

“There is no system in place whereby the government can get the right royalties due to it. It is just not possible. They cannot see the gold; how can they determine the value? There are no inspectors to monitor our operations. They come once in a while from the Federal Mining Officer’s office and we treat them well. They collect their share and that’s it,” he added.

In theory, it is not possible to engage in mining activities without a mining permit. It is in fact a crime. But in reality, tens of thousands of artisanal miners exploit sites across the country without any licences.

The miner said, “What tends to happen is that when most locals find gold on their lands, they call miners to come and mine. The miners pay the landowners good money on which no tax is paid.

“The community heads are part of the corruption. They are paid huge amounts of money by the mining companies to support their activities and they do not report these illegal mining activities to the authorities. Government does not know what is happening in these areas; it is when conflict starts that the Federal Government will realise that industrial-scale mining has been going on in an area.”

“Collaboration between politically connected Nigerians and Chinese corporations in illegal gold mining drives rural banditry and violent local conflicts in some parts of Nigeria, including the North West, North Central and to some extent South West regions,” said Ogbonna.

He said the government’s ban of artisanal gold mining in Zamfara State and across the region, and the deployment of soldiers to enforce the ban since April 2019, had yielded little results.

He added, “The conflict has been on the increase since 2014, spreading across Kaduna, Katsina, Kebbi, Plateau and Zamfara states. Over 5,000 people have been killed in Zamfara State in the past five years.

“In February 2020, soldiers killed 13 bandits during clashes in Zamfara and Kebbi states. In April, four soldiers were killed by robbers in Zamfara State, and police arrested two Chinese nationals for illegal mining.”