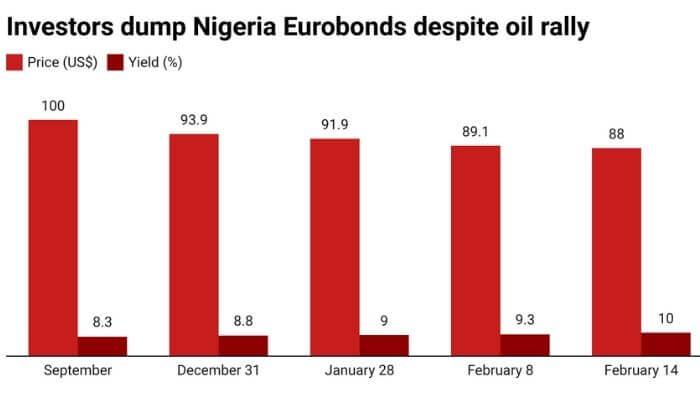 At no point in Nigeria’s history, since the discovery of oil, has a rally in oil prices failed to resonate with foreign investors until now, but that’s what you get when you are the world’s most inefficient spender.

Africa’s top oil producer is increasingly becoming less of an oil economy and more of one that will continue to struggle irrespective of rising oil prices due to an ever-growing petrol subsidy bill that has wiped out the gains of the oil price.

BusinessDay, in a detailed analysis Tuesday, demonstrated how even a $100 per barrel oil price will mean nothing for Nigeria, whose external reserves, currency, and government revenues are declining despite higher oil prices.

The trend has now extended to the country’s Eurobonds.

The yields on eight of 13 Nigerian Eurobonds have jumped this year, a sign of increased risk perception by investors.

The price of the last Eurobond issued is down by a record 12 percent, according to data from the trading platform, FMDQ, while the yield has jumped to 10 percent from 8 percent when it was first issued in September.

“It is very abnormal for Nigeria’s Eurobond yields to rise when oil prices are rising, it just goes to show Nigeria is becoming less of an oil economy due to the growing petrol subsidy bill,” notes Egie Akpata, a director at investment bank, UCML.

Nigeria’s reliance on petrol imports has always made higher oil prices a double-edged sword due to the petrol subsidy, but the cost of that practice has hit a record-high and lingering challenges with production means the country is no longer benefiting from a rally in oil prices.

The government is yet again reluctant to ditch the expensive practice, which was supposed to be phased out in June 2022 but will now continue for another 18 months.

The state-oil company, the NNPC, said the petrol subsidy will cost the government N3 trillion in 2022.

On Tuesday, President Muhammadu Buhari sought the approval of lawmakers for a supplementary budget of N2.6 trillion to cover the subsidy for 2022. The budget that was passed only made provision for N443 billion for subsidy for the months of January to June.

The supplementary budget takes Nigeria’s budget deficit to N8.94 trillion from an initial N6.38 trillion, about 4 percent of GDP.

A motley crew of economists, as well as the International Monetary Fund and World Bank, have all repeatedly urged cash-strapped Nigeria to do away with the expensive practice but the government has turned deaf ears to wise counsel.

Analysts at emerging market-focused bank, Renaissance Capital, expect the budget deficit to be much higher due to lower oil revenues on the back of lower oil production and the rising subsidy bill.

“On the fiscal front, the delay in removing the subsidy implies a budget deficit of 4.7 percent of GDP in FY22, on our estimate vs the government’s 3.4 percent target,” Renaissance Capital analysts said in a report.

“Although, typically, an improvement in FX liquidity hinged on higher oil price, lubricates Nigeria’s economic engines and spurs an increase in economic activity, but in 2022, it stated that this will be undermined by an uncertain outlook for oil production,” the analysts said.

Nigeria’s curious policies that have ensured it is eluded from rising commodity prices are benefiting other countries, such as South Africa for one.

Investor appetite for emerging markets has waned this year, but they still have a taste for South Africa.

Stocks on Johannesburg’s benchmark FTSE/JSE Africa All Share Index have got off to a blazing start, spurred on by strong prices for commodities.

The gauge set an all-time high last week and has returned 7.5 percent in dollar terms this year, compared with a 1.1 percent retreat for the MSCI Emerging Markets index.

South African government bonds have already returned 8.9 percent in dollar terms in 2022, the best performer out of 19 developing nations tracked by Bloomberg. The average for peers is negative 0.1 percent.

South Africa’s currency, the rand, is also faring better than most emerging-market currencies, even with its status as a proxy — meaning that in risk-off trade, it can be subjected to outsized swings.

Half of the 24 developing-nation currencies tracked by Bloomberg have made losses against the dollar year-to-date. The rand is among those to have strengthened, fourth overall with a return of 4.6 percent.

In Nigeria’s case, the currency is down from N415 at the beginning of the year to N416.7 year-to-date despite higher oil prices.

Nigerian stocks are also up 10 percent in naira terms, but in dollar terms, it is much less. The spot exchange rate for foreign portfolio investors is around N444 per dollar, lower than the N416.7 official rate.