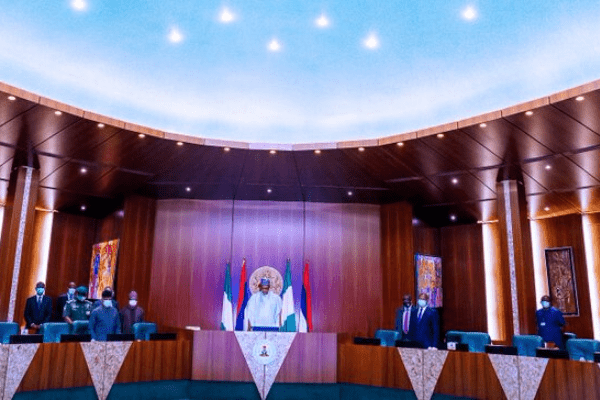 Share
President Muhammadu Buhari will on Friday sign into law the revised 2020 appropriation bill of N10.8 trillion, Minister of Finance, Budget and National Planning, Zainab Shamsuna Ahmed, has disclosed.
The minister made this disclosure while meeting with Senate President Ahmad Lawan and Speaker of the House of Representatives, Femi Gbajabiamila, on Thursday.
She revealed that the 2021-2023 Medium Term Expenditure Framework and Fiscal Strategy Paper (MTEF/FSP) will be submitted to NASS later in the month of July.
Ahmed further stated that Buhari had given directives for the ministry to expedite action on next year’s budget estimates to enable the presentation of the 2021 budget proposal by the end of September this year.
She said the signing into law of the revised 2020 budget which was passed by the National Assembly in June is in keeping strictly with the January-December budget cycle.
“This for us is a journey towards ensuring that the progress that we have made as a collective to return the fiscal year to January – December is maintained for the 2021 budget as well.
“The President has directed that we must deliver the budget to the National Assembly by the end of September,” the Finance Minister said.
While giving an update on the 2020 budget implementation between January and May 2020, Ahmed stated that the Federal Government’s retained revenue was N1.48 trillion, an amount representing 56 percent of government’s target.
She said that out of the sum generated as revenue, oil revenues accounted for N701.6 billion; non-oil tax revenues N439.32 billion; Companies Income Tax (CIT) and Value Added Tax (VAT) collections – N213.24 billion and N68.09 billion; and Customs collection N158 billion, respectively.
“Other revenues amounted to N339.51 billion, of which Independent revenues were N80.22 billion. Recoveries and Stamp duty collected during the period are yet to be booked in the fiscal accounts,” Ahmed said.
On Expenditure performance for the same period (January – May 2020), she disclosed that N1.25 trillion was expended for debt service; and N1.32 trillion for Personnel cost, including Pensions.
According to the Finance Minister, as at the end of May 2020, only N253.33 billion had been released for capital expenditure.
Ahmed while giving underlying assumptions driving the macro-economic parameters and targets of the 2021 – 2023 Medium Term Expenditure Framework, said the same was “revised in line with the emergent realities.”
She stated that the Oil Price Benchmark for the 2021 fiscal year was pegged at USD$35; and USD$40 for 2022 and 2023, respectively.
Oil Production (mbpd) was placed at 1.86 for 2021, 2.09 for 2022, and 2.38 for the 2022 fiscal year; while the Exchange Rate remains at N360 to USD$1.
Ahmed stressed that “although Nigeria’s total production capacity is 2.5 million barrels per day, current crude production is about 1.4 million barrels per day – in compliance with the Organization of the Petroleum Exporting Countries’ production quota – and an additional 300,000 barrels per day of condensates, totaling about 1.7mbpd.”
She added that while the World Bank forecasts that crude oil prices will rise gradually from an average of USD$42 per barrel in 2021 to USD$44.5 per barrel in 2022; and USD$47pb in 2023, it is also expected that Brent crude oil prices may average $41 per barrel during the second half of 2020 and $50pb during 2021, climbing as high as $53pb  by the end of next year.
“The nominal Gross Domestic Product (GDP) is expected to increase from N130,836.1 billion in 2020 to N132,125.4 billion in 2021 and then up to N138,415.8 billion in 2023,” Ahmed said.
In his remarks, Lawan said, “this meeting is holding at the instance of the Honourable Minister of Finance, Budget and National Planning, and the main purpose of the meeting is for the Minister to brief the leadership of the National Assembly on the 2021 – 2023 Medium Term Expenditure Framework and Fiscal Strategy Paper.
“Therefore, it will not be wrong to say that the journey to the presentation of the 2021 budget estimates by the Executive arm of Government has started in earnest.
“It is our expectation in the National Assembly, that this journey will lead to the presentation or laying of the budget estimates by the President before the end of September by the grace of God.”
Share