The Independent National Electoral Commission (INEC) Friday formally presented Certificates of Return to Senator Douye Diri and Senator Lawrence Ewhrudjakpo of the People’s Democratic Party (PDP), signifying the official recognition of the duo as the governor-elect and deputy governor-elect for Bayelsa State from the November 16, 2019, gubernatorial election. 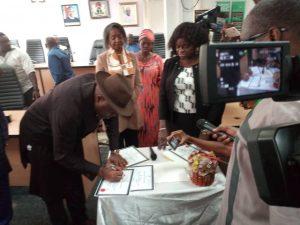 INEC’s action thus voided the declaration Thursday by the National Chairman of the All Progressives Congress (APC), Adams Oshiomhole that the PDP candidate’s votes did not meet the geographic spread to be required for a governor, and therefore would not be sworn in, as directed by the Supreme Court. The ruling by the apex court had voided the election of APC’s David Lyon and his deputy, Biobarakuma Degi-Eremieoyo, because the latter presented to INEC forged academic certificates. Both were to be sworn in today (Friday) as governor and deputy governor, respectively.

In cancelling the election of Lyon and his deputy, the Supreme Court ordered that the party whose candidate scored the next-highest lawful votes and also achieved the required spread should be recognised as having won the election.

In the judgment delivered by Justice Mary Peter-Odili, the Supreme Court ruled that for presenting forged certificates for the election Degi-Eremieoyo  (and by association, Lyon), were deemed not to have participated in the polls, which meant the votes previously credited to them were voided.

In certifying Diri as the governor-elect, INEC declared that he scored more than 25% of the lawful votes cast in all the eight (8) Local Government Areas of the State.

Oshiomhole, while reacting to the judgment Thursday declared that Duoye did not fulfil the requirements for the ruling that the next candidate with the highest votes should be issued a certificate of return and consequently sworn-in.

Oshiomhole had declared that “as far as we know, the next candidate, as the facts are before the court, who happens to be a PDP candidate, does not have one-quarter of the total lawful vote cast in that election in 2/3 of the local government councils in Bayelsa state.

“Therefore from the fact available to us, in consultation with our lawyers, it is clear that there is no candidate that meets the requirements of the supreme court, which means no one can be sworn in legally tomorrow unless there is a deliberate abuse of the legal process,” he said.

But INEC Chairman at a press conference in Abuja Friday, said that in compliance with the orders of the Supreme Court, the Commission met Friday morning and reviewed the result of the election in which 45 political parties contested.

According to him, without the votes scored by the All Progressives Congress (APC), whose candidates were deemed not to have participated in the election, the total number of lawful and valid votes cast in the election now stood at 146,999.

“Out of this figure, the candidate of the People’s Democratic Party (PDP) scored the highest number of lawful votes with 143,172. Similarly, the Party has scored more than 25% of the lawful votes cast in all the eight (8) Local Government Areas of the State.

“Furthermore, the total number of registered voters in places where election was not held or cancelled as a result of sundry violations is 90,822.

He further declared that “the Commission is aware that the tenure of the incumbent Governor of Bayelsa State ends at midnight today Friday 14th February 2020. Therefore, in fulfilment of the requirement of Section 75 of the Electoral Act 2010 (as amended) the Certificates of Return to the Governor and Deputy Governor-elect will be presented to them immediately as ordered by the Supreme Court”.

Consequently, INEC through May Agbamuche-Mbu, a National Commissioner, presented a Certificate of Return to Duoye Diri and his Deputy, Lawrence Ewhrujakpo.

In his acceptance speech, Diri thanked God, INEC and judiciary for being the hope of the Common man and assured the people of Bayelsa of good governance as well as called for reconciliation among the stakeholders.

“Our gratitude is to the creator, God Almighty who has made today possible. I want to appreciate the Chairman, Commissioners and all other staffers of INEC. I will not forget those who God have used for us to be here today- the judiciary which is the last hope of a common man,” Diri said.

Earlier Friday, before INEC’s declaration, Lagos-based lawyer, Imma Okochua, had told BusinessDay that INEC could not delay the presentation of certificates to Diri and his deputy, being bound by the Supreme Court’s order.

“The judgment is definite,” Okochua said by phone.  He clarified that the Supreme Court’s order that the candidate with the second-highest votes and met the constitutional spread of votes, be declared winner “as soon as possible” was because INEC would have to refer to its records to know who met those criteria. That verification could be completed within the shortest possible time, he noted.

He contended that the PDP candidate could not be disqualified on any other criteria besides the two specified by the Court.

How to set standards

Stakeholders, innovators, others converge on Lagos for ‘Food Revolution’

U.S, Nigeria governments at loggerhead over plan to return Abacha loot to Governor

U.S, Nigeria governments at loggerhead over plan to return…