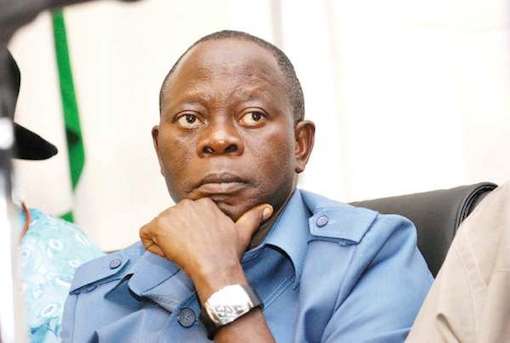 A Federal Capital Territory (FCT) High Court sitting in Jabi, Abuja, on Wednesday ordered the suspension of the National Chairman of the All Progressive Congress (APC), Adams Oshiomhole.

The suspension order is sequel to a suit filed by the National Vice Chairman, North East of the ruling APC, Comrade Mustapha Salihu, a factional chairman of the APC in Edo state, Anselm Ojezua and others, seeking to remove Oshiomhole from office.

The temporary suspension order is pending the determination of the substantive suit.

Justice Danlami Senchi, in giving  the order,  asked Oshiomhole to step down as national chairman of the party.

The court also ordered Oshiomole to stop parading himself as the chairman of the party, until all issues relating to the chairmanship position are resolved.

The judge also urged the APC to desist from acknowledging him as the chairman of the party and refuse him access to the national secretariat of the party.

The plaintiffs had prayed the court for interlocutory injunction asking the court to suspend Oshiomhole, having being suspended as a member of the APC in Edo State.

The application filed by counsel to the applicants, Oluwole Afolabi, dated  January 16, held  that Oshiomhole is currently suspended by the party in his state and has not challenged the suspension in any law court.

Going by this, the applicants said, Oshiomhole’s rights as a member or chairman of the party cannot stand.

He argued that Oshiomhole cannot continue to enjoy benefits from the APC despite his suspendion as a member of the party.

Oshiomhole is the first respondent, while the APC is the second respondent in the suit.

In the claimants’ motion, Afolabi, asked the court to stop the defendant (Oshiomhole) from parading himself as National Chairman of the APC just as they urged the Inspector General of Police and the Director General of the Department of State Services (DSS), from allowing the defendant access to the office of the Chairman, pending the determination of the motion on notice.

However, counsel to Oshiomhole and the APC, Damian Dodo (SAN) argued against the suspension order.

In his ruling on Wednesday, Justice Senchi granted the prayers of the applicants, adding that Oshomhole stands suspended until the substantive issue is dealth with.

The court has adjourned to 7 and 8 April to hear the substantive suit.