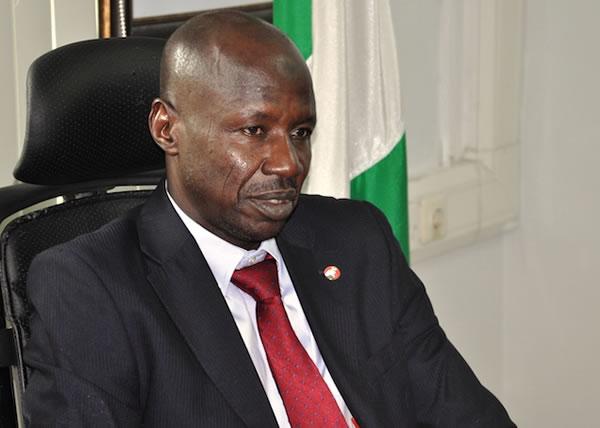 The suspended acting chairman of the Economic and Financial Crimes Commission (EFCC), Ibrahim Magu, has levelled multiple accusations of corruption against the Attorney General of the Federation (AGF) and Minister of Justice, Abubakar Malami, over recovered assets, calling on the presidential panel and Independent Corrupt Practices and other Related Offences Commission (ICPC) to investigate the AGF.

The suspended and detained Magu, who was arrested on Monday, July 6, by men of the Department of State Services (DSS), is facing the Ayo-Salami-led presidential panel over allegations of corruption, gross misconduct and re-looting of recovered assets running into billions of naira levelled against him by Malami.

However, Magu in a counter move through his lawyers on Tuesday, said he would file corruption charges against Malami to the Presidential Panel to investigate the AGF’s alleged illegal sale of assets recovered by the EFCC, insisting that Malami must step aside for a thorough investigation of the matter by the panel and ICPC.

One of Magu’s lawyers, Tosin Ojaomo, who spoke to BusinessDay on Tuesday, referred to a media report linking Malami to the alleged illegal sale of recovered assets for which he (Malami) had threatened legal action against the news medium that reported his alleged fraud.

“The AGF must step aside and allow investigation into the weighty allegations that have been made against him, most especially on the sale of vessels. Go and look at the EFCC Act, the AGF does not have the power to sell recovered assets,” Ojaomo said.

“Let me tell you how this operates. If a vessel is seized by the Nigerian Navy, the vessel is handed over to the EFCC for investigation and prosecution of the offenders. Now, the AGF unilaterally, without any authorisation from the EFCC that is investigating this matter, that is in custody of these exhibits and these seized assets, granted approval for contractors to go and be selling those properties.

“Go and check the provisions of section 31 and 32 of the EFCC Act and you will see the punishment that is clearly in those provisions for anybody that deals with any asset that is under forfeiture from the court on behalf of the EFCC without clearing from the EFCC.

“So, these are serious infractions and the AGF has also admitted granting the approvals, claiming they are legal. We are now saying that the sales are illegal because there is a clear provision of a statute on how to deal with those assets. So, that is why we are calling for the AGF to step aside so that the panel can also investigate those allegations because one of the things Magu is being investigated is the issue of assets and the AGF’s name also featured there,” he said.

Ojaomo said Malami is the chief law officer of the country and if he is being found wanting, in a saner society he would have been the first person to step aside.

“We are calling on him to step aside so that these weighty allegations on unauthorised sale of seized assets, most especially crude oil and vessels, can be thoroughly investigated,” Ojaomo said.

“We call on the ICPC to immediately commence the investigation of the AGF because they ICPC deals with public officers and the AGF is a public officer.

“What he alleged that Magu did he has also done it because he was authorising sale of assets without recourse to the commission. So, he has to step aside so that investigation can go on,” he said.

Anatomy of corruption in Nigeria

Dealing with compound words in English