...says candidate of party with next-highest votes to be sworn in 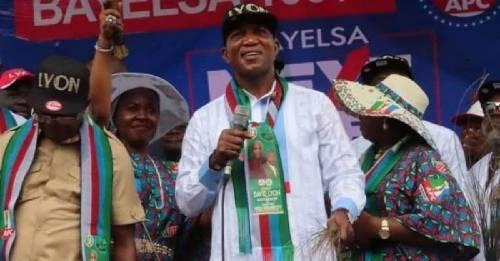 The Court ordered the withdrawal of the Certificate of Return issued to APC’s David Lyon and his deputy, Biobarakuma Degi-Eremienyo, as the governor-elect and deputy governor-elect of Bayelsa State in the polls.

Nigeria’s highest Court also ordered that the candidate of the party that scored the second-highest number of votes in the November 16, 2019 gubernatorial polls should be sown in as governor of the State.

The swearing-in of the governor of Bayelsa is scheduled to hold Friday, February 14, 2020.

The decision of the Supreme Court was based on the fact that Degi-Eremienyo, submitted to the Independent National Electoral Commission (INEC) forged certificates for the governorship election, the Court said.

The seven-member committee of the Supreme Court chaired by Mary Odili held that once a candidate submits a forged certificate for an election, he is deemed not to have contested in the election at all, hence its decision to award the certificate of return to the party with the second-highest number of votes.