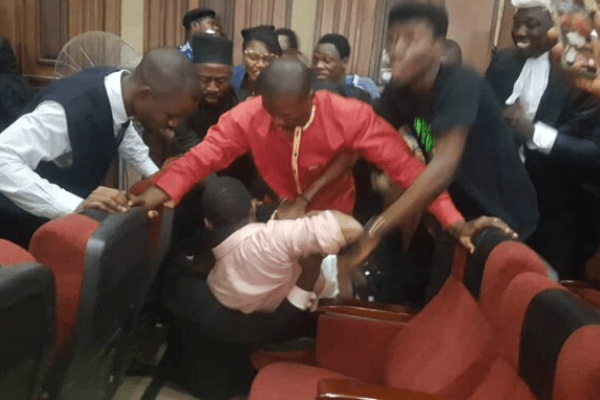 The Attorney-General of the Federation (AGF) and Minister of Justice, Abubakar Malami, has said that the office of AGF was taking over the  prosecution of  the convener of RevolutionNow, Omoyele Sowore and co-defendant, Olawale Bakare from the Department of State Security (DSS).

This is even as the AGF said the federal government was committed to respecting the sanctity of the rule of law, protecting the virtues of human rights and ensuring speedy dispensation of justice.

The duo are facing treasonable felony at a Federal High Court in Abuja for calling for a revolution protest. They were freed  on December 4 on court order after spending more 100 days in the custody of the DSS.

In attempt to re-arrest them on December 5, operatives of the secret police had invaded the courtroom which has elicited both national and international condemnation.

A statement by Dr. Umar Jibrilu Gwandu, spokesman to the AGF on Friday in Abuja, said as part of efforts to probe the recent imbroglio related to Sowore’s case and for speedy dispensation of justice, the AGF has requested that the case file in respect of charges pending before the Federal High Court, Abuja, be forwarded to his office.

Gwandu said the request for the transfer of the case to the office of the Attorney-General and Minister of Justice is contained in a letter dated December 11,  2019 and addressed to the Director General of the Department of State Services, National Headquarters Abuja.

The Solicitor General of the Federation and the Permanent Secretary, Federal Ministry of Justice, Dayo Apat (SAN), who signed the letter referred to a letter from the DSS office on 9th September, 2019, said the statement.

According to the letter:  “The Honourable Attorney-General of the Federation and Minister of Justice upon a further review of the case has  directed the immediate takeover of the prosecution of all charges in respect of Omoyole Sowore by the Federal Ministry of Justice in line with the provisions of Sections 150(1) and 174 (1) (a-c) of the 1999 Constitution (as amended)”.

What to do when travelling with disabilities