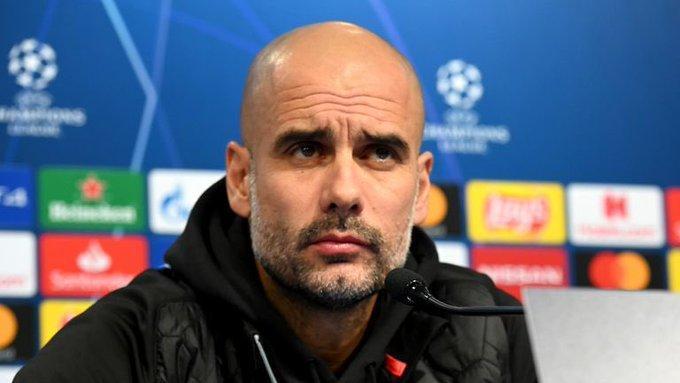 When asked if he would want to avoid English teams in the draw, Guardiola answered. “I would say no.
“It is difficult for us and them too and for opponents from other countries. We are in the last eight and we will prepare well and next Friday we will see the draw. It is an honour as important teams are out,” he said.

However, with the UEFA Champion League quarter-finals draw billed for Friday, March 18, there is the possibility that four teams from the English Premiership would make the last eight.

With Manchester City and Liverpool having already secured their places in the last eight, Manchester United and Chelsea will have to battle Atletico Madrid and Lille respectively for a place in the last eight. Chelsea already have an edge over their opponent with a 2-0 victory away in France, while Man United will need at least 1-0 victory to edge out Atletico Madrid after a 1-1 draw at Wanda Metropolitano Stadium in their first leg match.

Read also: With eyes on Champions League, Pep Guardiola hangs on with Manchester City
For Guardiola to say that he does not care about facing any EPL team is a statement that leaves many football enthusiasts wondering if he really does understand what he said.

Going by Manchester City’s Champions League campaign history, the English teams have been their worst undoing in their quest to clinch Europe’s most coveted club trophy for the first time.

Man City have played four matches against English clubs in Europe and have lost every single one. It started with home and away defeats to Chelsea in the 1971 European Cup Winners’ Cup semis.

Then, they lost both legs of their Champions League quarter-final tie against Liverpool 2017-2018 season. The first leg ended 3-0 in favour of Liverpool, while the second leg was Manchester City 1-2, Liverpool. Liverpool ended Man City’s Champions League campaign by beating them at Anfield and the Etihad Stadium. That was a complete victory and a statement of superiority.

In 2018-2019, Manchester City was beaten by Tottenham Hotspurs, and Chelsea, with Thomas Tuchel, a new manager who was just learning his trade in the EPL denying City the joy of lifting the trophy in 2021. Chelsea defeated Pep Guardiola’s men in a match many believed should have been won by the Etihad outfits.

Tottenham Hotspurs also defeated Man City with players and a coaching team many soccer pundits believed were far below Pep Guardiola and his team.

Pundits are worried that the problem of Manchester City and Champions League victory against English Premier League teams goes beyond the form and quality of players going by history.

Manchester City sealed their spot in the last eight, with a 5-0 aggregate win over Sporting Lisbon, following a 0-0 draw at home. It is still a concern to many City fans that Guardiola is yet to find the formula when it comes to playing against teams from England in the Champions League, especially at finals like this.

Bayern Munich, Liverpool, Manchester City, Real Madrid have all secured their places into the quarter-finals draw. While the remaining ties are those of Ajax (2) vs (2) Benfica; Manchester United (1) vs (1) Atletico Madrid; Juventus (1) vs (1) Villarreal; Lille (0) vs (2) Chelsea that are yet awaiting the return fixtures to be played on Tuesday, March 15 and Wednesday, March 16.

The draws for the Champions League quarter-finals will take place on Friday, March 18 at 11 am UK time, with the balls being drawn out at UEFA’s headquarters in Nyon, Switzerland.

The first-legs of the quarter-final ties will be played on April 5 and 6 with the return fixtures on April 12 and 13. The semi-finals will start on April 26 and 27 with the second legs on May 3 and 4. The Champions League final is on May 28 at Paris’ Stade de France.