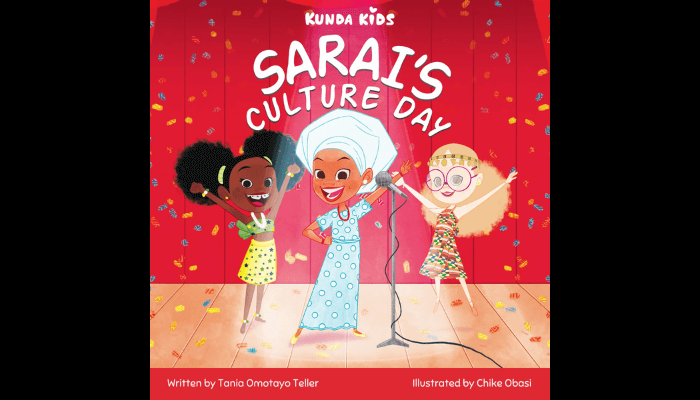 One of the ways that have been identified as foundational to supporting social-emotional learning and development is for children to embrace their culture and identity..

When cultural identities are nurtured, people will not only build trust and stronger relationships with children, but they’ll also ensure that they experience a sense of belonging in the classroom.

By incorporating activities aimed at supporting a child’s cultural identity, people inspire the curiosity and collaboration needed so they can better relate to the experiences of others.

It is in this light that Kunda Kids, an award-winning children’s publishing, Ed-tech and media company, have announced the launch of its latest book titled ‘Sarai’s Culture Day ‘to inspire the next generation to embrace their culture and heritage.

The book is scheduled to be released in London on 19th November and in Lagos on the 3rd of December 2022.

Sarai’s Culture Day is a warm and uplifting book that is the perfect springboard to teach children the importance of embracing their culture and heritage.

It has encouraged schools across Europe and Africa to have their own Culture Day and to learn and showcase their culture and heritage.

The book is written by Tania Omotayo, an acclaimed model, fashion designer, entrepreneur, and the owner of the famous fashion house “Ziva Lagos”. Illustrated by Chike Obasi, it will reconnect young Africans in the diaspora to their roots.

Commenting on the inspiration behind the book and why it was an important project for the company, Louisa Olafuyi, the Co-founder of Kunda Kids, noted that “Children should be encouraged to embrace their culture, which positively impacts how they see themselves and embrace others too. For example, Sarai’s Culture Day shows parents and teachers how to do this by connecting through cultural items such as music, fashion, food, and history. The groundbreaking children’s book also touches on soft critical skills such as kindness, advocacy, self-acceptance, and anti-bullying,” she explained.

On her part, Tania Omotayo, the author of ‘Sarai’s Culture Day’ has advised young people to know that their originality is their superpower! Noting that Sarai’s culture Day’ is inspired by her three-year-old daughter, Sarai.
Omotayo concluded “I want young people to understand that they are uniquely perfect just the way they are, irrespective of race, religion, and culture. “Always be proud of where you come from; there can only ever be one you!”