by Hope Moses-Ashike & Onyinye Nwachukwu in Adamawa On Dec 13, 2019 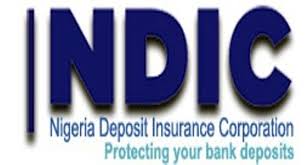 The Nigeria Deposit Insurance Corporation (NDIC) on Thursday said it would protect the depositors of Payment Service Banks (PSBs) nd guarantee to pay them N500,000.00 as insured sum in the event of their closure.

The CBN in September 2019 granted Approval -In-Principle (AIP) to Hope, Money Master and 9PSB to operate as Payment Service Banks.

Umaru Ibrahim, managing director/CEO, NDIC disclosed this at a workshop for finance Correspondents and business editors in Adamawa, Yola State.

The NDIC extended Deposit Insurance Scheme (DIS) coverage to Micro Finance Banks (MFBs) and Primary Mortgage Banks (PMBs). In a swift response to public yearnings, and to bolster public confidence in the financial system, in 2010, the maximum Deposit Insurance coverage was increased from N200,000 and N100,000 to N500,000 and N200,000 for deposit money banks (DMBs) and Microfinance Banks (MFBs)/Primary Mortgage Banks (PMBs), respectively. The coverage level for the PMBs was later reviewed upward to N500, 000.

The Corporation also provides deposit insurance coverage to subscribers of Mobile Money Operators (MMOs) to the maximum limit of N500,000.00 through the Pass-Through Deposit Insurance Framework. As it stands, the number of licensed MMOs by the CBN is 23, with eight being “Bank-Led’’ and the remaining 15 “Non-Bank Led”. As at 30th June, 2019, the number of subscribers to MMOs stood at 9,249,265.

In the first decade of its existence, the primary focus of the NDIC was the management of cases of distress in the banking system. When it commenced operations in 1989, a number of banks were already in varying degrees of insolvency. The Corporation rose to the occasion in its adoption of multiple distress resolution options in line with its mandate and functions to deal with the situation at the time.

These included the provision of some assistance in the form of direct loans, acceptance of accommodation bills; changes in the management of the affected banks, assisted mergers with other viable institutions, imposition of holding actions, and, in some instances, the outright take-over of the management and control of the banks involved.

Other failure resolution options adopted during that era included bank liquidation. The Corporation’s first experience in bank liquidation occurred barely four years after its establishment on the 21st January 1994 when the Central Bank of Nigeria (CBN) revoked the licences of two merchant banks and the Corporation was appointed the provisional liquidator. Between 1994 and 1999, the licences of 31 banks were similarly revoked and subsequently liquidated by the NDIC through the same provision.

Ibrahim noted that as at 30th June, 2019, the Corporation received a total number of 35 petitions/complaints from Banks customers on various issues such as ATM frauds, unauthorized funds transfers, cheque related issues and much more. Investigations and mediation were carried out where necessary and customers were appropriately reprieved.

To assist in the promotion of the financial inclusion initiative of the CBN, the NDIC introduced the Framework for a Pass-through Deposit Insurance scheme to enhance confidence, safety and stability of the mobile payment system. The deposit insurance scheme caters for the interest of the users of Mobile Money platforms as it guarantees payment to the subscribers of the funds domiciled in Mobile Money Operators Trust Pool accounts in insured institutions in Nigeria.

“The other milestones recorded by the NDIC in the area of financial inclusion has been the promotion of other types of banking sub-sectors such as non-interest banks and strengthening of the Microfinance policy in order to build more inclusive banking system where every Nigerian would have equal access to economic opportunities,” he said.

“Obviously, while there is still much work to be done in our aspiration to become one of the best Deposit Insurers in the world, considering how far we have come since 1989, we can say that the progress we have recorded so far has been gratifying and worthy of celebrating. With the articulation and adoption of appropriate policies and strategies, the Board, Management and Staff are committed to the objectives of the Corporation and are fully resolved to ensure that the NDIC effectively fulfils its statutory mandate,” Ibrahim said.

How Nigeria can make significant impact on Tuberculosis notification rates

Lagos lawmaker, Tunde Braimoh, may have died of COVID-19