Lafarge Africa Plc: Set to regain vibe after a disappointing past

Following five consecutive quarters of delivering negative Earnings Before Interest, Taxes, Depreciation and Amortization (EBITDA) and the eventual sale of its loss-making South Africa operations, Lafarge South Africa Holding Limited (LSAH) to LafargeHolcim Group for the sum of $316.2 million, Lafarge, Nigeria’s second-largest cement company by installed capacity is back on the path of profitability.

Results from its third quarter for the period ended 30th September, the first post-divestment earnings report, show that the cement maker recorded gains on disposal of discontinued operation to the tune of NGN106.5 billion, after having recognised cumulative exchange differences on the asset and non-controlling interest derecognised, both of which summed to NGN7.6 billion. Wiping off shareholders’ loan totaling N1134 billion leaving the company’s total loans and borrowings at N64.75billion split across Bond (NGN35.01 billion), Power Fund (NGN13.31 billion), Lease Liabilities (NGN15.08 billion), and Bank loans (NGN1.15 billion)

The group revenue which comprises Nigeria and LSAH was lower by 25.1percent to N53.91bn in Q3. This result accounts for July-September financial performance for Nigeria and July for LSAH operations. Within the period, Nigeria revenue dropped 7.25percent to N45.17bn in the third quarter on the back of lower cement volumes and price competition.

Interestingly, despite this decline operating profit increased to N7.45bn with  (EBITDA) growth of 73.9percent to N14.93bn supported by the sale of LSAH and reduction in cost base. 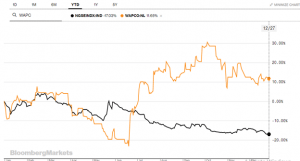 The board of the company earlier in the month announced the resignation of Michel Puchercos as the group managing director/chief executive officer with effect from the 17th of January 2020, having served as an executive director on the Board since the 1st of April 2016. It also announced the appointment of Khaled Abdelaziz El Dokani as the new group managing director/chief executive officer.

Mobolaji Balogun is the chairman, other non-executive directors include Elenda Giwa-Amu, Adenike Ogunlesi, Adebode Adefioye, among others.

For cement makers in the country, it was a mixed fortune during the year as analysis of performance during the year shows a surge in cement demand in Q1 on the back of increased pre –election CAPEX spending in a bid to woo electorates. However, demand plummeted in Q2 caused by the prolonged 2019 general elections postponements, together with the raining season in the country.

Read also: Lekki, Maryland, Allen roundabouts, others to be remodeled

Consequently, performance improved markedly in Q3 even as the double whammy hammer of heavy rainfall in the period and land border closure, put a cap on sales uptrend. Also, intense competition in the cement industry means that producers remain price sensitive as they struggle to maintain market share. With cement makers such as Dangote Cement introducing promotional launch during the period in a bid to drive sales volume in the country.

The good news is that the early signing of the 2020 budget into law by President Buhari, would eliminate slow-down in government spending on critical infrastructure across the country. Of the total N2 trillion earmarked in 2019, a total of about N294.63billion had been released for capital projects as at September 30th 2019.

In the 2020 budget, a total of N2.14 trillion has been earmarked for Capital Expenditure (CAPEX) spending, excluding CAPEX components of statutory transfers. The government has also vowed to prioritise in favour of critical ongoing infrastructural projects in the power, roads, rail and agricultural sectors.

If the government could keep to his promise, it could further spur the growth of cement makers in the country.

Notable projects in 2020 budget which would be heavy cement consuming projects include the National housing program which is expected to gulp N17.5billion while the social housing scheme (family homes fund) would cost N30billion.

While over N210 billion has been earmarked for the construction and rehabilitation of roads across the country. Interestingly, there is a growing preference for cement paved roads by the government as evident in the 28km Itori-Ibese road in Ogun State which was commissioned in 2016 and the 43km long Obajana-Kabba road in Kogi State, the 32km Apapa-Oshodi-Oworonshoki-Ojota road in Lagos State is almost done.

Also, in the 2020 budget, N2billion has been set aside for the Mambila hydropower project, a 3.05GW hydroelectric facility being developed on the Dongo River near Baruf, in Kakara Village of Taraba State. The project is being undertaken by Nigeria’s Federal Ministry of Power, Construction and Housing, with the help of Chinese investments.

Mustapha Wahab, analyst at Cordros Securities said the upside risk for the industry in 2020 is a stronger demand growth, with average cement prices to rise by 1bp to NGN2,197/bag.

“While we acknowledge the significant shortfall from the NGN2.93 trillion budgeted in the prior year, our optimistic view hangs solely on a higher implementation rate, given better revenue prospects,”

“However, the downside risk to our prognosis remains the possibility of significant cost pressure occasioned by currency devaluation, which would force players to re-think their pricing strategies,” he said.

For 2020, the completion of the debottlenecking of its Ashaka cement plant, plant reorganisation in Ewekoro I & II, gains from energy efficiency, and lower finance burden, will combine to drive strong earnings for the company.

Here’s what you need to know about cold room business

The role of manufacturers in mitigating impact of coronavirus

The role of manufacturers in mitigating impact of…