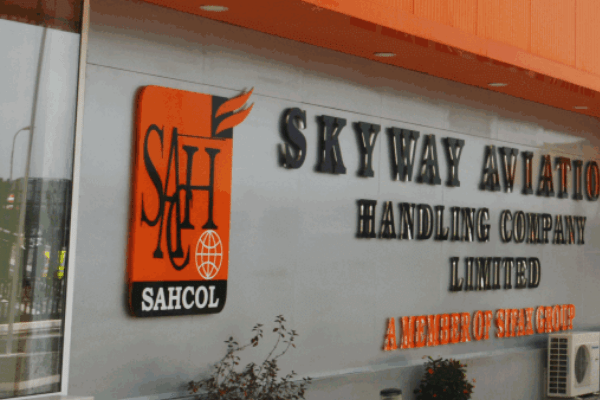 This was disclosed at the company’s 2020 Annual General Meeting (AGM) at the SAHCO Complex at the Murtala Muhammed International Airport, Ikeja, Lagos.

Basil Agboarumi, Managing Director/CEO, SAHCO PLC emphasized that this remarkable shift was achieved through the resilience of the entire workforce, aggressive marketing strategies that saw to the addition of our clientele list, concerted efforts of cost containment and effective internal control processes.

The AGM was conducted in accordance with the guidelines issued by the Corporate Affairs Commission (CAC) on the conduct of Annual General Meeting via proxies as part of the measures to mitigate the negative effect created by the current Coronavirus (Covid-19) pandemic.

During the event, SAHCO PLC declared a dividend of N 223,340,700 at 16.5k (Sixteen and a half kobo) per share which is payable less with the appropriate withholding tax at the time of payment.

Speaking during the event, Taiwo Afolabi, Chairman of the company said he is delighted to address a larger pool of shareholders for the first time even if it is virtually. According to him “You will recall that SAHCO became a publicly quoted company after its listing on the Nigerian Stock Exchange (NSE) in the last quarter of 2018, the listing, a natural progression in our post-privatisation strategic growth plan, is also in furtherance of the vision to becoming the preferred ground handling company in the West African sub-region in terms of revenue, clientele base, quality of service, customer satisfaction, innovation and return on investment.

In his remarks, Agboarumi said the Single Africa Air Transport Market initiative contributed to the growth of the Nigeria Aviation industry and Ground Handling sub-sector in 2019.

He said the company is ready to attract new Airlines as we expect new start-up airlines before the year ends which are; NG Eagle and Green Africa.

He stated that the management intended to reposition SAHCO PLC as the best ground handling company in West Africa by acquiring more client airlines using the leverage of being the preferred handling partner of British Airways and other global carriers already in her fold.

Skyway Aviation Handling Company PLC is an aviation ground handling company that is involved in activities like Passenger Handling, Ramp Handling, Cargo Handling and warehousing and all the actions that takes place from the time an aircraft touches down on the tarmac to the time it is airborne, while also ensuring that Ground Handling assignment is carried out in an efficient, speedy and safe manner, while deploying the right tools.