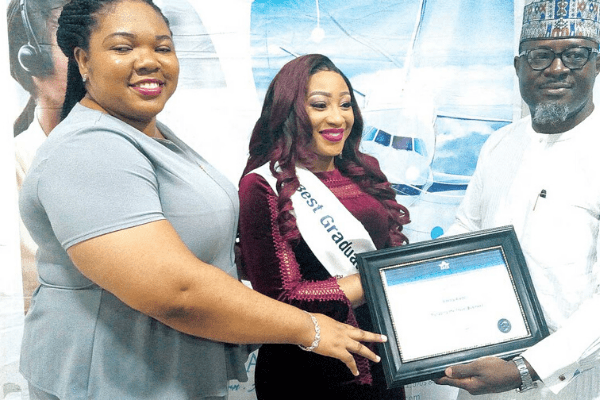 Focused on being the Best Aviation School in Nigeria and West Africa, LAA is actively involved in grooming seasoned aviation professionals in the Nigerian industry and West Africa in the near future, hence the purpose of the scholarship.

While addressing the recipients of the scholarships, Dickson Odikwue and Bolaji Omosipe who were contestants in the Cabin Crew Contest, Chinasa Mbene, the General Manager, Lagos Aviation Academy, who was representing Bankole Bernard, the Academy’s Director, remarked: “On behalf of the management and staff of Lagos Aviation Academy, Nigeria’s top aviation, travel, and tourism school, we are pleased to present this scholarship award to you. Lagos Aviation Academy is passionate about building careers and developing young talents in this industry.

“We are proud to present you this opportunity and happy to support you as you begin your journey into aviation. We are sure you will have a great time, training and learning from our seasoned instructors at Lagos Aviation Academy. Congratulations!” she added.

Katheryn Lademo, the organizer of the contest noted that the purpose of the Cabin crew contest was to educate the flying public on what a flight attendant does, the rigorous process involved in becoming one and most especially to give wings to the dreams of many young people who want to tread this path.

Lagos Aviation Academy (LAA) is an IATA Authorized and NCAA Approved Training Organization situated in the central district of Lagos Mainland. The Academy commenced operations in the year 2017 with the objective of raising competent aviation professionals in the industry.

Bankole Bernard, the Academy’s Director a seasoned professional with proven track records as an industry leader.

He is a two-term President of the National Association for Nigerian Travel Agencies (NANTA) after four years of meritorious service as its Financial Secretary (2010 – 2014).

The guardrails are finally off