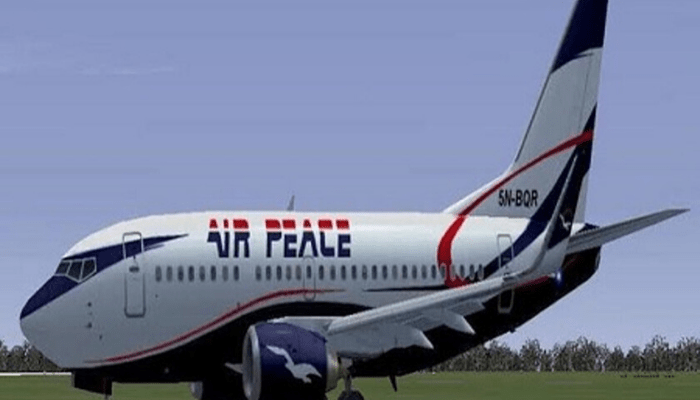 Share FacebookTwitterLinkedinWhatsAppEmailTelegram
As the resumption of domestic flight operations is drawing near, Nigeria’s leading airline, Air Peace, on Wednesday June 24, 2020, in a show of strength and readiness to resume operations, littered the Nigerian airspace with several of its fleets of aircraft in shakedown flights.
It should be recalled that the airline has a mixed fleet of 25 aircraft which includes three wide body aircraft, the Boeing 777s.
All the aircraft took to the skies flying to Abuja, Port Harcourt and back to Lagos without passengers
These flights were aimed at ensuring that the aircraft are in tip-top condition, having been grounded for close to three months though they have been under very strict storage maintenance.
The Spokesperson of the airline, Stanley Olisa, who revealed this in a statement to journalists, said the shakedown flights are part of the measures the airline has developed to guarantee the safety of both passengers and crew when operations resume.
He noted that the aircraft have been in storage mode for a couple of months and extensive maintenance checks have been carried out to keep them up to the required standards.
According to Olisa: “Within this period of flight ban, we have ramped up technical maintenance of all our aircraft, scaled up cabin refresh and carried out thorough disinfection to ensure they remain fit for the skies when the authorities flag off operations”. He added that the aircraft are now being brought out of storage and the pilots have been testing them, stressing that all pilots and flight attendants have been retrained in line with NCAA directives.
On the airline’s readiness to resume regular flights, he stated: “As you know, we have been operating ‘special flights’ to local and international destinations, and we have more of such flights in the works. This accentuates our preparedness for operation restart as our pilots, cabin crew and engineers have been hands-on and are very current. So, we are hundred percent ready to resume”.
Air Peace has been operating charter and evacuation flights to various international destinations even as the flight ban persists. In April, the airline delivered Federal Government’s medical supplies from Turkey and China to fight the COVID-19 pandemic. It has also operated several evacuation flights to India, Israel and China in the last two months.
Share FacebookTwitterLinkedinWhatsAppEmailTelegram