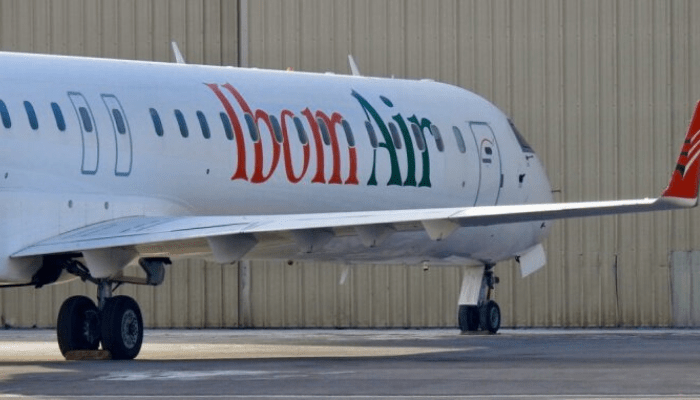 The inaugural flight to Calabar, the Cross River State, capital on Monday which took off from Lagos was operated with the Ibom Air CRJ900 and had onboard Donald Duke, the former Cross River State governor, his wife, and other passengers who were excited to fly with the airline for the first time.

The Ibom Air flight on landing was welcomed to the Magret Ekpo International Airport Calabar with a water cannon salute by officials of the Airport Rescue and Fire Fighting Services of the Federal Airports Authority of Nigeria while passengers were welcomed by a traditional dance troupe of the state.

Speaking on the entry of Ibom Air into Calabar, former Governor Duke said he was excited about this development as the airline service to the city would open up businesses in the state.

He stated that before now, they were not able to move in and out of Calabar at will, adding that with Ibom Air connecting the state with Lagos and Abuja directly, the people and visitors would be encouraged to come in and go out at anytime.

Duke stressed that the hospitality industry in the state would benefit fully and small businesses would spring up.

“Commuting and all that, you know unfortunately, until lately it’s only be one flight in and out of Calabar, so this adds to it, this adds more commerce to the city when people can go in and come out more frequently and there are more visitors, so the hospitality industry will benefit because our people can benefit lots more, overall, it will become a destination, you are not a destination if I can’t get to you, so people can come in here and leave at will, then you are a destination,” he said.

Duke commended the airline for maintaining high safety standards and always keeping to departure time, urging the people of the state to patronize Ibom Air to get value for money and the best of service.

Amaka Echetabu, Ibom Air director of airline services, said the airline was happy to spread its wings to Calabar in these unprecedented times and was determined to sustain its on-time departure, schedule reliability, and superior service.

She emphasized that no matter how the market shrinks, people would expected to be moved from one place to the other and the airline was here to do that movement.

“We want the people to feel worth their weight in gold when they come to fly, we want to treat people very well, this is what we are really all about at Ibom air, we want to give them the best and what they paid for,” she said.