Ebonyi international airport to be completed in 2022 – Governor Umahi 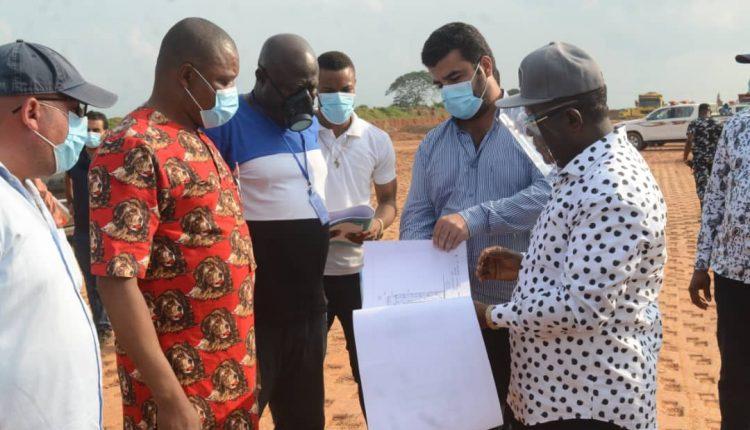 Share
The Governor of Ebonyi State, South East, Nigeria, David Umahi said his administration is targeting 2022 for the completion of the ongoing International Airport in Ezza South local government area of the State.
The Governor made this known while inspecting the project on Tuesday noting that with the speed of work at the site, the airport will commence operation by 2022 and that will boost the economy of the State.
The Governor from Monday commenced inspection of his projects across the three senatorial zones of the State.
Governor Umahi who doubles as the Chairman south east Governor’s forum,  further explains that his target is to finish every ongoing project before leaving the office in 2023.
“This is 2020, we are looking at 2022 unfailingly to complete this Airport Project. But most of the important projects we are passionate about completing are these Airport, the College of Medicine, dualisation of Abakaliki-Afikpo Road, Abakaliki to Enugu and the stadium, these are the major projects we have.
“The Bible says when men say there’s a casting down, we will say there’s a lifting up. Abraham followed God when He asked him to follow him to show him land, he believed God. When God sends you on a mission and you have a passion, He gives you a vision that you pursue with passion.
“Everything is possible to those who believe. You have to have the passion then, God will make a way for you.
“This is the terminal building for the airport, it is like two and a half size of the Shopping Mall, if you can trace the Mall, this is like two and a half size of the Mall. It is going to be the biggest terminal building in the country. We have done almost 90 percent of the pilling and the vocal, and that’s the real work and it is where takes more money, what’s in the ground is more than what is coming up.
“The tarmac is a hundred metres width, it’s like ten-lane by 4 kilometres. Tarmac is a different thing because there’s impact load, there’s traction load and also there’s dynamic load, there is a special design, but the earthwork is very challenging, we are going through valleys and hills and we are on it. You can see the airport road, it’s about 4 kilometres. The airport flyover is being set out for construction.
Share