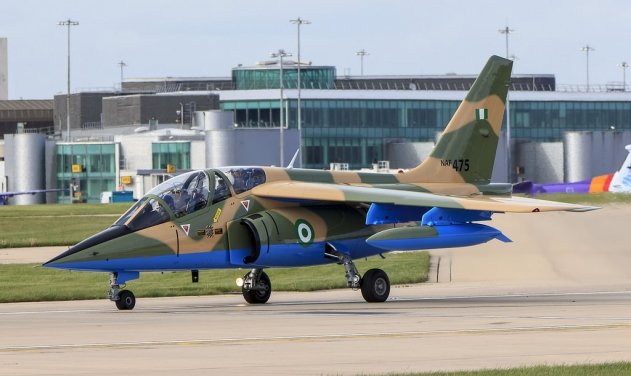 On the 31st of March 2021, Nigerian Air Force Alpha Jet aircraft (NAF475) went off the radar with two crew members on board and it was later reported to have crashed.

Generally, a military plane or jet crash can be caused by a wide variety of factors, such as design or manufacturer defects, pilot error, negligent maintenance, air traffic controller error, inclement weather or brought down by an enemy.

What are Alpha jets?

The Alpha jets series of planes was a combined France-Germany initiative to create an innovative tactical trainer aircraft with close-air support warfare abilities.

It was planned to succeed the Fouga Magister, a 1950s French two-seat jet trainer aircraft, developed and manufactured by French aircraft manufacturer Fouga.

Alpha jets were also to replace the Lockheed T 33, a subsonic American jet trainer. It was produced by Lockheed and made its first flight in 1948.

These older jet models were fuel-inefficient and expensive to maintain.

The French company Dassault-Breguet generated the first evaluation. It was designed under the classification of “TA501″. This combined the features of two earlier German and French proposals.

The concept was approved for additional development. From the two participating countries and was finalised to become the “Alpha Jet” of the early 1970s.

They now have over a million flying hours to their credit.

The US Navy sought to replace the T2C and TA4J jet series for its Undergraduate Jet Flight Training Programme Sys (VTXTS) and wanted the replacement to be more fuel efficient and cheaper to maintain.

The Navy wanted one aircraft that was efficient and suitable for honing the skills of tomorrow’s carrier jet pilots – such as the F-16 fighter jets.

In the fall of 1980, Lockheed Martin Corporation, American aerospace, arms, defence, security, and advanced technologies company with worldwide interests introduced the Alpha jets to the US government and Navy.

The Alpha jets are a top European design. It was designed and built by Dassault-Breguet in France and Dornier in Germany, companies are aircraft makers.

Alpha jets are high performance light aircraft that are easy and cost-effective to operate. Pre-flight inspections are simple and fast. It is an excellent plane designed for minimum support.

For example, engines can be replaced in just an hour with a few tools. All equipment servicing are accessible from the ground. It has low fuel consumption and is good for training and advanced light-attack. It has its place in history and training colleges. It integrates simulations, academics and real combat, but then whether it is suitable for modern warfare is another discussion.

Alpha jets have fought in many African wars

The Nigerian Air Force is probably most famous for the widely condemned bombing of Biafra secessionist state; the 1960s equivalent of the conflict in Darfur.

However, in the 1990s the Nigerian military embarked on a more defensible mission, at least in theory ;  trying to restore order to a Liberia torn apart by Civil War as part of a West African peacekeeping force called the ECOWAS Monitoring Group (ECOMOG).

Alpha jets were an important part of the Group’s air power through Nigeria’s Air Force.

By 1990, the corrupt and brutal Liberian government of Samuel Doe had been nearly overthrown by two rebel factions, the National Patriotic Liberation Front led by Charles Taylor and a splinter group called the Independent (NPLF).

ECOMOG was also sent to intervene in Sierra Leone’s conflict in 1994, and like in Liberia, it would achieve temporary military successes, and then utterly fail to “win the peace” leading to a resumption of war.

Alpha jets in the fight against Boko Haram

After the ECOMOG mission in the 1990s, the Nigerian Alpha jets would not see action again for more than a decade. Many of them fell into poor condition for lack of maintenance.

In 2009, an Islamic fundamentalist insurgency called Boko Haram, which means “Western education is forbidden,” emerged in North-Eastern Nigeria in the states of Borno, Adamawa and Yobe.

Government corruption and brutal military reprisals that resulted in hundreds of innocent citizens being tortured and killed by government troops escalated the insurgency’s violent attacks year after year.

Boko Haram insurgents started employing terrorist bombings, guerrilla warfare and large-scale raids on villages and military bases, culminating in the infamous 2014 Chibok raid in which 276 schoolgirls were kidnapped to serve as “wives” for Boko Haram fighters.

In 2013, the Nigerian Air Force began to take measures to refurbish 13 of its Alpha jets. Two were sent to Niamey, Niger to support a multi-national peacekeeping force there. But one crashed fatally in an accident that May.

As Boko Haram seized control of more villages, President Goodluck Jonathan declared a state of emergency in the North-Eastern states.

Alpha jets based in Yola and Maiduguri soon were flying a combat mission in their own country.

Alpha jets of the Cameroonian Air Force joined the fray in December 2014 with airstrikes against Boko Haram militants that had overrun the Cameroonian military base in Assighasia. The attacks reportedly killed 41 insurgents and compelled the rest to flee. Cameroon still operates 11 ground-attacks Alpha jets out of an original 27 purchased.

Meanwhile, the United States approved the transfer of four unarmed Alpha jets to the Nigerian Air Force in 2015.

Nigerian air travel in the time of pandemic