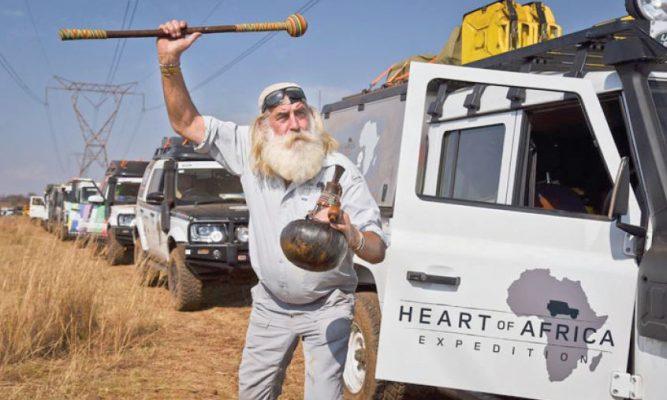 …Including Ghana, Togo and Benin

As part of his lifechallenging adventures across the continent, Kingsley Holgate Foundation began the year 2017 with a West African adventure, in a sojourn that saw him and coadventurers return to a region it last visited nearly a decade ago. The three-week-long ‘Slaves, Castles, Voodoo and Gate of No Return’ journey forms part of the Living Traditions series of expeditions, and included stops in Ghana, Togo and Benin.

“We last visited these countries in 2007 and 2008, when we circumnavigated the outline of Africa in a world-first for Land Rover, which resulted in a book called ‘Dispatches from the Outside Edge’,” said Kingsley Holgate. This time around, the mission was different. His went to gather information and document cultures for posterity, and also to highlight the fastdisappearing treasures Mama Africa has to offer.

This ‘Slaves, Castles, Voodoo and Gate of No Return’ journey was an opportunity to add another great traditional ceremony to the Living Traditions
book. These expeditions visit various sites in Africa to document and bring attention to ancient traditions and historic sites that are in danger
of disappearing forever. Many more journeys into Africa are planned for the next two years, all of which will be included i the Living Traditions book set to be published in 2018.

The expedition to West Africa saw Kingsley and his team fly directly to Ghana, where they were supplied a Land Rover Discovery by Alliance Motors; the country’s Land Rover retailer. Once equipped with the only vehicle that can effortlessly conquer the African terrain, the team zig-zagged across Ghana. Departing Accra, its capital city, they headed to the Gold Coast where 29 forts and castles still stand as testimony to the West African slave trade that saw around 12.5 million slaves transported to the Caribbean and Americas.

From there, they proceeded to Cape Three Points on the Southernmost point of the country and inland to West Africa’s biggest and most colourful
market, situated in Kumasi, the historic capital of the Ashanti gold empire.

The Land Rover journey also took the team to Akosombo, where a massive, 114-metre- high dam wall holds back the Volta River to form Lake Volta said to be the largest man-made lake in the world. Other West African countries were also visited on this Living Traditions journey, including a cross-country journey through Togo en route to Benin, to research and document the Voodoo Festival in Ouidah, the ancient coastal town that is also a stronghold for the religion, which is estimated to have more than 50 million followers worldwide.

“Thousands of devotees attended the colourful festival, coming from all over West Africa and also as far as Brazil,” said Holgate. “It was an opportunity to add another great traditional ceremony to the Living Traditions book, which will also feature Ethiopia’s Timkat Ceremony, the Turkana Festival of northern Kenya, the Swazi Reed Dance and many other vibrant ceremonies and cultures across Africa.”

The Kingsley Holgate Foundation is renowned for packing its fleet of Land Rover vehicles full of humanitarian aid and this trip was no different. The Alliance Motors-supplied Land Rover Discovery, fitted with tyres supplied by General Tyres, made short work of crossing thousands of kilometres of testing African terrain, carrying malaria nets and Rite to Site reading glasses for the poor sighted in remote areas. Malaria education and top quality long-lasting insecticide-treated bed nets were supplied to pregnant mothers and mothers with children under the age of five, at numerous villages along the route. One of the stops also included the Anyanui Health Centre in Ghana, which treats 540 cases of malaria every month during the rainy season.

In 2017, Kingsley Holgate Foundation’s team will embark on more expeditions to document the rare, colourful and sometimes sombre traditions and history of Africa.

Lagos to employ art as healing therapy in health facilities

‘We have brought into Ikeja, specifically Lagos Airport area, an elevated level of…

Some visa-free destinations for Nigerian travellers this summer