What is the European Super League? 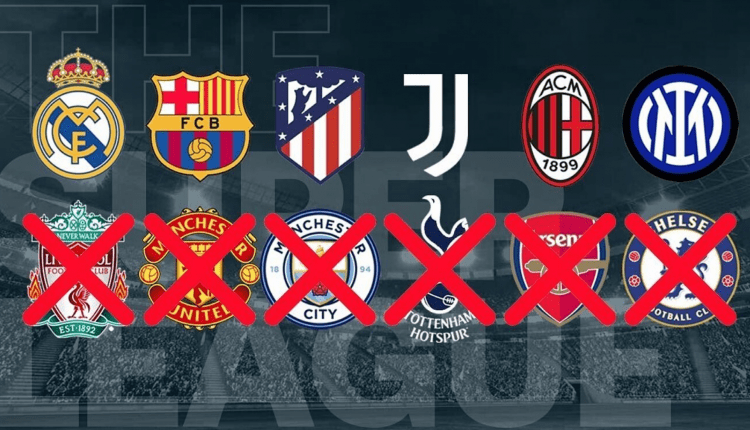 This idea of an independent league called the super league had been stirred in the football industry as far back as the 1980s.

The European Super League can be described as a league that provides an atmosphere for competition exclusive to elite teams across Europe. The purpose of this competition is to pool monetary resources for these big clubs, as all teams are to share 3.5 billion euros for participating.

According to a football leaked document reported by Der Spiegel, a German publication, the Super League structure would consist of 16 teams: 11 founding fathers and 5 other teams. These founding fathers would include big teams across Europe which are Barcelona, Real Madrid, Manchester United, Manchester City, Liverpool, Chelsea, Arsenal, Juventus, AC Milan, Bayern Munich, and Paris-Saint Germain. These 11 teams, according to the leaked document reported by Der Spiegel, are privileged to be immune from relegation while the other 5 are to compete to survive relegation.

Who are the current members of the Super League?

Currently, 12 football teams have united to form the Super League. With Bayern Munich and Paris-Saint Germain wanting no parts of this formation, 3 clubs have chosen to fill the spot. Tottenham Hotspur, Atletico Madrid, and Inter Milan have been announced as 3 of the twelve members of the European Super League.

Who is Funding this Competition?

JP Morgan & Co., powerful financial service and investment bank in the United States has openly announced that it would be funding the start-up of the European Super League with a sum of 3.5 billion euros.

How has FIFA & UEFA reacted to this?

The UEFA committee has described the sudden intention of these Super League enablers as a rebellious move against the football industry. The idea that the Super League does not give opportunity for all football teams the opportunity to compete for a spot in the champions’ league. “This idea is a spit in the face of all football lovers and our society as well. We must not let them take (football) away from us. I have seen many things in my life, I was a criminal lawyer for 24 years. I’ve seen many people. I’ve never seen anyone like that. …we didn’t know we had snakes working close to us, but now we know,” UEFA president, Aleksander Ceferin stated.

The UEFA body also announced their intention to disqualify 3 of the four football clubs who qualified for the Champions League semi-finals. It has been publicly acknowledged that these 3 teams (Chelsea, Real Madrid, and Manchester City) have signed up for the super league. This could mean that Paris-Saint Germain would be automatic winners of the competition.

The same could be done to teams in the European Europa League who have signed up for the super league.
Aleksander also stated that players who play for teams in the Super League would not be allowed to participate in international team competitions (World Cup and Euros).

Why Bayern and the German teams shunned the Super League signing

Giants of Germany, Bayern Munich, refused to join the Super League on the account that the fans did not like the idea. Herbert Hainer, the president of the Bayern Munich football club, stated, “Our members and fans reject a Super League, like Bayern, it is our wish and our aim that European clubs live the wonderful and emotional competition that is the Champions League, and develop it together with UEFA. Bayern says no to the Super League.” Karl-Heinz Rummenigge, CEO, of Bayern Munich, revealed that the champions league is the best competition.

For Bayern Munich and Dortmund, as well as a large proportion of the German league, they adhere to a ‘50+1’ rule. The idea is to set down a majority fan ownership in order to control or hinder private investors from taking full control of the club. Hence, the decision of fans to reject the super league contract played a powerful role in influencing the clubs’ actions.

It was announced yesterday, April 20, 2020, that 6 of the premier league big teams (Manchester United, Liverpool, Chelsea, Manchester City, Arsenal, and Tottenham) have taken the step to leave the super league.

After days of conflict between fans, UEFA, and the Super League football club managements; it can be said that the fans have taken the victory to win for themselves football. Although football is a business sport, where owners of the clubs tend to make a profit at certain costs, the fans have a major part to play in contributing to the club’s revenue and profits. The majority of the fans have taken it to Twitter to vent their dislikes for the idea of a super league. Hashtags on Twitter stating #superleagueout was promoted yesterday after hearing the news of the withdrawal of the premier league big teams.

The 6 premier league teams have released press statements to address their actions of withdrawing from the super league. Manchester United addressed that they “listened carefully to the reaction from our fans, the UK government and other key stakeholders” in making their decision to not take part.” Chelsea stated that they had “begun the formal procedures for withdrawal from the group” that they only joined “late last week”.

Arsenal has apologised openly to their fans, admitting that they “made a mistake and (we) apologise for it” on their Twitter account. Liverpool made it known that their participation in the super league “has been discontinued”. Daniel Levy, the Chairman of Tottenham, addressed the remorse for the “anxiety and upset”n caused. Manchester city declared that they had “formally enacted the procedures to withdraw” from the Super League.”