Has government lost its monopoly of violence to terrorists? 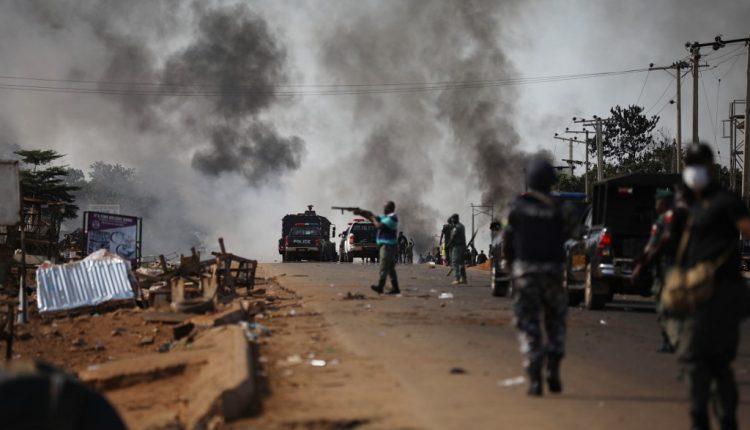 Like in many areas, Nigeria is powering very low on security. The government has since lost its power to non-state actors, which has turned the country into a huge insecure enclave where lives are lost at ease and with no one asking questions.

The government appears so impotent that bandits and other assorted brands of criminal gangs now dictate the pace of things.

While Boko Haram has asserted itself in many parts of the North East, driving political leaders to tears with their murderous activities, bandits have taken over many parts of the North West, dispensing anguish on daily basis. Moreover, in some parts of the North Central down to South East and South West, Fulani herdsmen kill at will, sacking indigenes from their ancestral homes and terrorising everyone without any challenge from government of the day.

Read also: 2023 polls: We will not tolerate any form of violence, Military warns politicians

Nigeria has sunken to the point that criminal gangs abduct innocent citizens at will, and take them into the bush and Nigeria’s combined security forces, including the military are not able to do anything in an age of technology where other countries deploy drones to do a lot of things.

The other day, on the very nose of government, terrorists took their dastardly act to a notch higher by waylaying the President’s advance security team in Katsina.

Later that same day, another band of the bloody vampires launched a ferocious attack on Kuje Correctional Centre, a stone’s throw to the seat of power in Abuja, deploying bombs, Rocket Propelled Grenade (RPG) and General Purpose Machine Guns (GPMG), and freeing over 600 inmates, including Boko Haram fighters detained at the facility.

In Nigeria today intelligence gathering by security agencies does not mean anything. They may gather it but they do not use it for anything. Sources said that the security appratchiks were told of the planned attack on Kuje Correctional Centre, nothing was done to nip it in the bud.

Nigerians have reached a point where their governor cannot rescue her citizens from terrorists but terrorists can easily and do easily rescue their members from government prisons. As serious irony!

Dachung Bagos, deputy chairman, House of Representatives Committee on Anti-Corruption, believes that chunk of the blame for the worsening insecurity in Nigeria should be on the Federal Government.

He recalled that the House recently organised Security Summit where useful suggestions were made, but the Executive arm headed by President Muhammadu Buhari did not act on those suggestions and recommendations.

“We have called for the sack of the National Security Adviser (NSA) on the floor of the House, but nothing is happening. Nigerians are disappointed in the executive for not coming hard on the intelligence community. Look at the July 4 shooting in Chicago, the perpetrator has been apprehended and the citizens are sure that justice is going to be served, but here it is about media talk,” he said.

Bagos who was worried that government is not doing what it should do even in crisis situation, said: “We expect that the pictures of the 64 terrorists that escaped should be everywhere now for Nigerians to see. They should have been published, profiled; it is not an issue of restricted information. Their pictures should have been out there so that people will be able to recognise them on the road and alert the necessary agencies,” he said.

Cecil Esekhaigbe, a retired major-general, wondered how a huge number of terrorists could beat all the security posts on the road without anybody noticing or challenging them.

According to him, “Those guarding such facility should be investigated. And we are having conflicting figures of those who escaped and who are still around.”

He also said that some of the negotiators with the terrorists were said to have passed the intelligence or information that plans were afoot to attack the correctional centre, yet nothing was done about it.

Some years ago when the problem of insecurity was at its infancy stage, Chidi Amuta, a publicist and international journalist, in an exclusive interview with BusinessDay, said that the Nigerian Federal Government may be losing its monopoly of violence and dispensing of brute force to rein in outlaws.

Today, it does seem that government has completely lost that right to bandits and other assorted criminal gangs in the country.

Amuta had said that “The capacity of the state to guaranteeing security of lives and property is also a function of the state of the economy. It is the duty of the state to buy guns, to maintain a police force, military and all which is superior to those of the ones challenging them. But a situation where non-state actors are now challenging the state, in the area where the state used to have monopoly; then there is problem.”

According to him, “In those days, if you hear that government is coming, you run away because government has uniform and has big guns. But today, uniforms and guns are no longer a monopoly. In fact, non-state actors- the militants and all the others- have bigger guns. Theirs is even more frightening. Armies and soldiers have a protocol for deployment of forces. Now, a militant or terrorist has no protocol, they have no rule of engagement; in fact, the bigger the gun a person wields, the more the person is a commander. And as a result of that, insecurity which breeds instability becomes the order of the day.”

In what seemed a shameful acceptance of incompetence and complete disappointment of the masses of this country, the Federal Government Friday admitted that the country’s security operatives could not match the superior firing powers of terrorists that attacked the Kuje Correctional Centre. Kai!

The Islamic State for West Africa Province (ISWAP) terrorists had claimed responsibily for the attack on the Correctional Centre, located at Kuje, about 25 minutes drive from the only International Airport that serves as gateway into the Federal Capital Territory (FCT) on Tuesday night.

The Minister of Police Affairs, Mohammed Dingyadi, while briefing State House journalists on the outcome of the National Security Council meeting presided over by President Buhari at the Presidential Villa, Abuja, disclosed that “the security personnel deployed to the facility did their best to repel the attack but were subdued by the superior weaponry of the terrorists.”

Speaking on an exclusive interview with BusinessDay Sunday, Olisa Agbakoba, a SAN, said the attack was shameful.

“It just shows that at the highest level security is not taken seriously except it is regime protection; because I cannot see how 300 bandits could storm a prison; stayed there for hours and nothing happened and nobody knew.

“So, that tells you that security is not a high agenda; it is not a high priority in government. Where were the DSS, the entire security apparatus in Nigeria? They all went to sleep and these guys were in the prison for 3 hours?”

Asked what his reaction would be if he were the president, he said: “I would fire all the Service Chiefs, and anyone responsible for internal security from the Minister of Interior to the DSS. Somebody must take responsibility; look at the UK Prime Minister, Boris Johnson resigning. Someone must bear the consequence for failure.

“I would sack everybody responsible and make it clear that if you don’t do your work, you get the punishment. But in this country where there is no punishment, no sanctions so it is not an issue. Even the Minister was at the Prison; is that what he should be doing? So, when there is no sanction for bad behaviour that’s what you get. I would fire everybody including the prison controller-general. How do you have grasses growing around the entire place; that’s a security threat in a place called medium security prison; and you are going there in your opulence. The proper thing to do is to fire all the people responsible.”