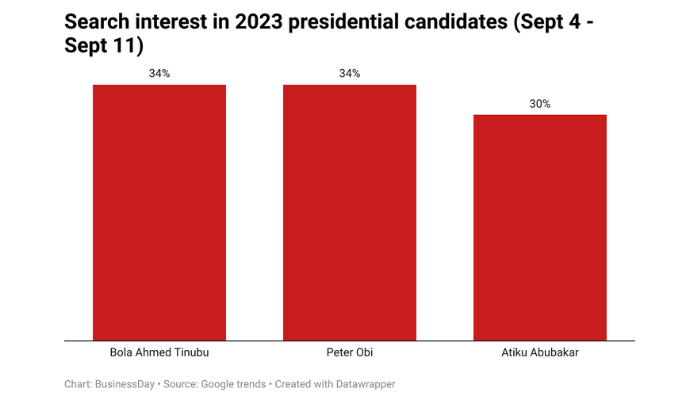 BusinessDay’s analysis of Google trends data on search interest show that Bola Ahmed Tinubu, the presidential candidate of the ruling All Progressives Congress (APC), is gradually gaining on the People Democratic Party’s (PDP) flag-bearer, Atiku Abubakar, in the North, while maintaining an average of 20 percent and higher search interest across all states.

Atiku received a higher proportion of search interest in Niger, Jigawa and Kaduna between August 28 and September 4. 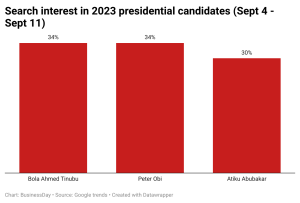 However, as of last week (September 4-11) Tinubu’s search interest in these states had jumped and overtook that of Atiku, except Bauchi State, where both men were tied. 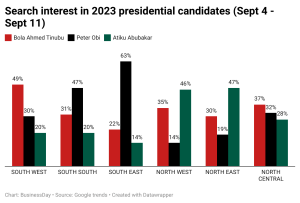 According to BusinessDay’s analysis of the data, Borno State is more likely to vote for Tinubu, as he wields the highest average search interest, coupled with the fact that his vice-presidential choice was also a former governor of the said state. 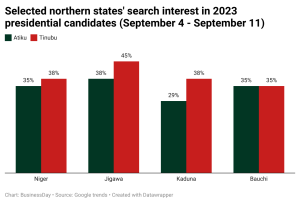 On a broader scale, Tinubu and Obi are tied on 34 percent of total search interest across the country, ahead of Atiku who garnered 30 percent.

South-eastern states yet to accept Atiku

Google trends analysis shows Atiku has the lowest average search interest across all south-eastern states, while Obi ranks highest and Tinubu maintains 20 percent and above across these states. 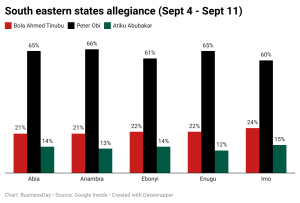 The northern region’s allegiance lies more between Atiku and Tinubu, except for the North-Central, where Obi wields some power and dominates some states like Benue, FCT, Plateau, and Nasarawa, and would most likely lose in states like Yobe, Jigawa, Kebbi, Zamfara and Katsina where he is yet to gain ground. 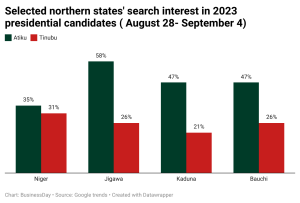 Tinubu has held the Rockies down and is gradually turning the Northern Alliance bloc whose loyalty has been to the PDP towards his party, to win the election.

These four states out of 11, Borno, Jigawa, Osun, and Bauchi, where he had a tie with Atiku are already changing their allegiance to the APC presidential candidate. All these states, apart from Bauchi, are governed by the APC.

The Bible Belt, another PDP loyalist bloc, which has the highest number of voters but low voter turnout, is made up of 17 states drawn from the South-East, South-South, and eastern North-Central.

Analysis by BusinessDay shows that this loyalty is wavering as the Labour party presidential candidate, Peter Obi, is dominating across all states in the South-South and South-Eastern region while the North-Central is being shared between Obi and Tinubu.

“Tinubu’s strategy appears centered on the vote-rich North, underlined by his choice of the Muslim northern running-mate,” the Economist Intelligence Unit said in its latest country report on Nigeria. “This reduces his potential appeal in the south, but his standing in the north will be bolstered, and winning that region is necessary for electoral success.”

According to the EIU, Atiku is trying to broaden his appeal, having chosen a southern Christian running mate, but the PDP will be up against “third force” parties (notably the labour party) making inroads in the South.

It said: “We believe that Tinubu has the advantage at this stage. Assuming victory for the APC on a Muslim-Muslim ticket (or even if Abubakar wins), parts of the south will inevitably feel under-represented by federal politics.

“Secessionism is a live issue in Biafra, and we expect calls for Nigeria to split to become stronger over the medium to long term.”