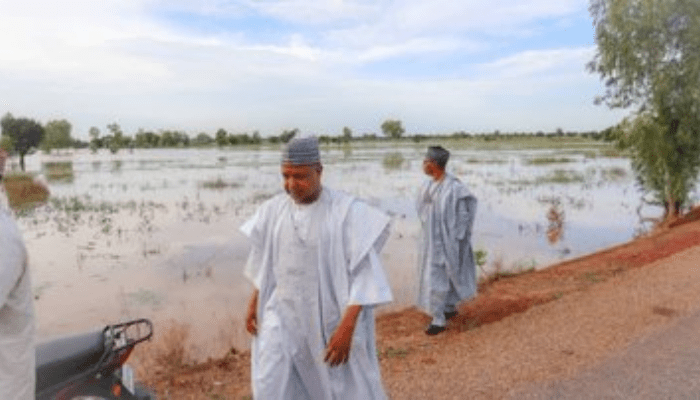 The Kebbi State Caucus in the House of Representatives, Tuesday said the state lost an estimated N10 billion to flood disaster.

Kebbi has been recently ravaged by the flood which washed away five bridges located in different parts of the state with many areas submerged and cutting the Northern and Southern parts of the State from each other.

The Nigerian Meteorological Agency had forecasted that Kebbi would be among the states to be hit by flood this year, beginning from September 6.

Briefing journalists in Abuja, the Kebbi Caucus in the House led by the Chairman, Muhammad Jega said
the flood is a serious setback towards addressing food security in the country as Kebbi contributes 60% to rice production in the country.

According to lawmakers, the government needs to address the shortfall of the food supply chain to reduce the hardship and cost of food items in the market and also address the severe environmental degradation caused by the flood.

They said the government can assist through adequate and early preparation for dry-season farming and reconstruction of major infrastructure affected in the state.

The Kebbi representatives called on the Federal Government to commission a study with the aim of providing a lasting solution to the perennial flood disaster in the state.

The lawmakers also called on the Federal Government to urgently send relief materials to alleviate the suffering of the people in the state while early preparation for dry season farming should commence in earnest with the provision of seedlings, fertilizer and other inputs to be made available to the farmers in good time.

“We the Kebbi State caucus of the House of Representatives commiserate with the government and people of Kebbi state over the flood disaster that has ravaged the entire state being the focal point of the Federal Government policy for rice production in the country.

“The disaster could not have come at a worse time for our farmers who hitherto look forward to a bumper harvest this year to reduce the rising cost of food items, it is a major setback to the Federa| Government effort to boost local rice production as part of measures to end rice importation.

“We commend the President and commander in chief of the armed forces of the Federal Republic of Nigeria, President Muhammad Buhari GCFR and the Executive Governor of Kebbi state Senator Abubakar Atiku Bagudu for the prompt response to reduce the hardship caused by the flood”, the legislators added.

Nigerian-British Chamber of Commerce: The Future of Trade and Investment in Africa