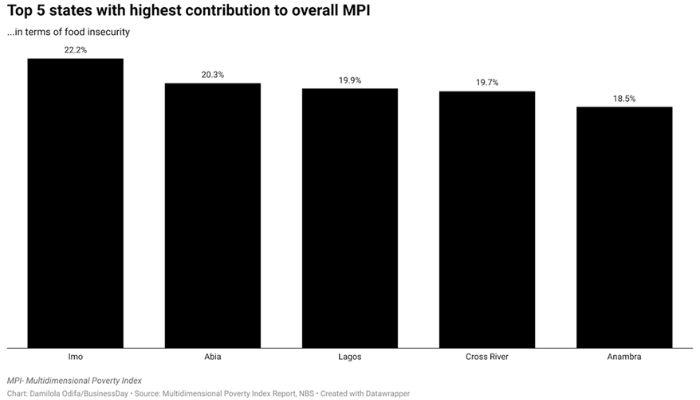 The Multidimensional Poverty Index (MPI) 2022 report recently released by the National Bureau of Statistics (NBS) has stratified states/geopolitical zones in the country based on an array of metrics that give figures to the poverty level in the country.

MPI measures a range of deprivation factors, such as poor health, lack of education, inadequate living standards, the threat of violence, living in areas that are environmentally hazardous, disempowerment, and poor quality of work.

According to the index, Imo, Abia, Lagos, Cross River, and Anambra states contributed the highest percentage to overall MPI in terms of food insecurity. 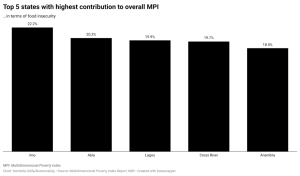 In terms of nutrition deprivation, the five states with the highest contributions to the MPI are Kano, Katsina, Jigawa, Yobe, and Kebbi. 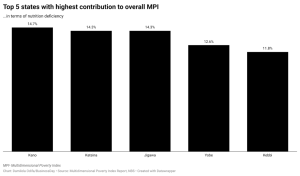 Lagos, Ondo, Benue, Bayelsa, and Cross River topped the list of states that have water problems, contributing the highest percentages to the overall MPI at 9.3 percent, 7.5 percent, 7.3 percent, 6.7 percent, and 6.6 percent respectively. 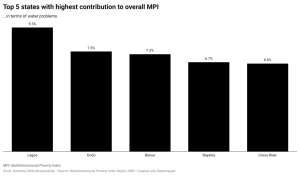 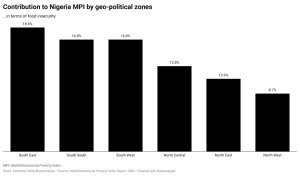 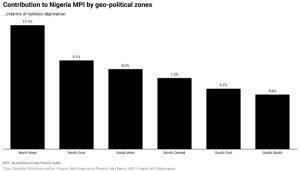 Food insecurity is when a household is severely food insecure, according to the Food Insecurity Experience Scale.

For nutrition metrics, a household is deprived, according to the MPI report, if any child under the age of 5 is undernourished (i.e. stunted or underweight) or if there is any adult household member with a body mass index lower than 18.5.

Water is a problem if a household does not have access to safe drinking water, according to SDG guidelines.

In a panel discussion at the 28th National Economic Summit organised by the Nigerian Economic Summit Group, stakeholders urged the Federal Government to align policies, projects, and budgets with the MPI survey.

The country’s baseline indicators point to aggravated human conditions that need to be alleviated. Hence, experts at a forum during the summit said data from the MPI report will instigate multidimensional ways to end multidimensional poverty, as it will impact how top budgeting is being done, how projects are being designed, and how policies that impact citizens can be formulated.

Semiu Adeniran, statistician-general of the federation/chief executive officer of the NBS, explained that the MPI is a rather wholesome way to measure poverty, as against the typical income/monetary measurement the country has used in the past.

“The 82.9 million people figure that the country has been using as its headline poverty figure – the number of Nigerians that are poor, was derived from the Nigerian Living Standard Survey, which was conducted in 2018/2019 and was released during the covid period, 2020,” he said.

“Clearly, this data does not holistically capture the poverty landscape of the country. If it does, then we don’t have the number of poor people that the government hopes to lift out of poverty by 2030.”

Adeniran, however, said the MPI survey that was recently conducted looked at poverty from multiple deprivations that households/individual members of households suffer at the same time.

“It is the real/appropriate measure for us to take to measure poverty in the country,” he added.