What doesn’t break you makes you stronger” – Ndidi Nwuneli

In episode 2, my guest was Ndidi Nwuneli. Anyone who knows her knows that she is passionate about agriculture, the youth and nation-building. It was however interesting to hear her ‘fire’ moment.

She starts by sharing her greatest influences in life, which she says are her faith and her parents, both Professors. She says they introduced her and her siblings to service early in life.

On her passion for the youths, she reminded me about being told at 28 that she was the leader of tomorrow, and for a country whose life expectancy is 57, and the people who told her she was the leader of tomorrow told her same in the 70s, 80s, 90s, 2000 and above, and many are still in public office till date, she submits therefore that it is time the youths get more involved in nation building because they are the leaders of today not tomorrow. “They are our greatest asset hence the setting up of LEAP Africa to inspire the next generation of African leaders to transform Africa.” She said.

On the importance of literacy, she explains that her company AACE Foods had to engage their production staff in adult literacy programmes when they realized that most of them could only speak Yoruba, which she says is a beautiful language but to move up the ladder and interact with suppliers, distributors and to read manuals for the machines being used, record what was produced daily, they had to be able to read and write. 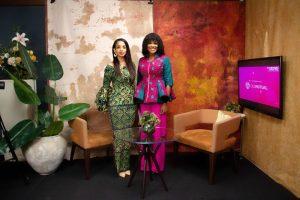 The class took place after work and weekends. Interestingly, most of her production staff who came in as entry level and contract staff to sort out pepper, ginger and so on, some of who were also gate men, are now reading and writing. They are gradually moving up the ladder and Ndidi says she knows that perhaps one day, they can also lead the company too.

Read also: I was offered a counterfeit of my product in China – Tara Fela-Durotoye

On her FIRE SESSION, in 2007, she was 9 months pregnant with her daughter and her husband was shot in the knee and he had to be rushed to America. She says he almost died. So she was 9months pregnant, and also had to care for her husband and her 3 year old. It was very traumatic especially because her husband’s mum had died very tragically 6 months earlier “I had to support my husband 110%” Nwuneli admitted. Thankfully, he survived, but he had to go through 6 months therapy because he couldn’t walk. Though LEAP was thriving at that time, she had to leave suddenly. Through the process, he told her he wasn’t going to live in Nigeria anymore or even eat Nigerian food or listen to Nigerian music. He decided he was going to move to Senegal. He eventually did, got a private equity job there and she had to move there with him.

Moving to a country where she didn’t have a job or understood their language, and also with toddlers was indeed challenging for Ndidi. “It was very traumatic. I got a BA Degree, meaning Begin Again. From being on the front page of magazines in Nigeria, to getting a national honour, to having to go and start again was tough for my ego and mental health”. Ndidi said.

Nevertheless, she said her faith in God and her amazing family sustained her. One of her sisters hosted them for 4 months. Another sister would, every night, order him exotic food because he no longer wanted to eat Nigerian food, and the third sister would call her every day to say “The fight is fixed and we know who the winner is”.

That mental and emotional support was so critical. After persevering and keeping hope alive, she started writing business plans. Her first being Oxfam and then she began to get other projects. It was from there her 3 companies were born, Sahel Consulting, Sahel Capital and AACE foods, all in the midst of her ‘fire’ period.

Today, her marriage is over two decades, her daughter who was born in the midst of the challenging period is today an exceptional child.

Another good side to the story is that her husband has since been back to eating Nigerian food and even running marathons from initially being unable to walk.

The programme airs every Thursday on Wazobiamaxtv on Dstv channel 259 and UHF 57 Terrestial (Free to air) 7:30pm WAT. It will be worth your time.

“From a very early age, I was made to believe that I can” – Owen Omogiafo

NCP names Zainab Ahmed as chairman of NELMCO board