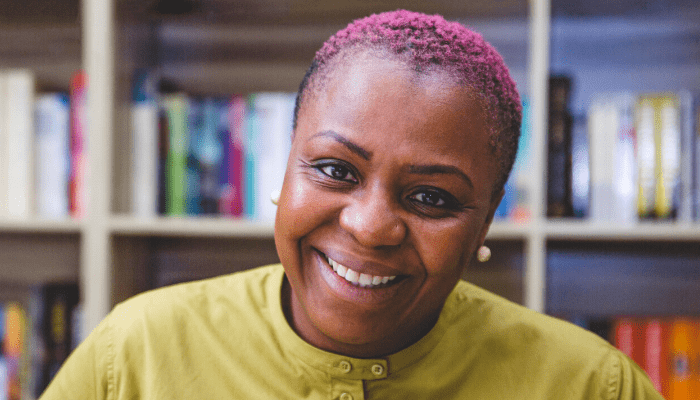 Lola Shoneyin is a Nigerian poet and author, who launched her debut novel, The Secret Lives of Baba Segi’s Wives, in the UK in May 2010. Shoneyin has forged a reputation as an adventurous, humorous and outspoken poet (often classed in the feminist mould), having published three volumes of poetry. In April 2014, she was named on the Hay Festival’s Africa39 list of 39 Sub-saharan African writers aged under 40 with potential and talent to define trends in African literature. Lola won the PEN Award in America as well as the Ken Saro-wiwa Award for prose in Nigeria. She was also on the list for the Orange Prize in the UK for her debut novel, The Secret of Baba Segi’s Wives, in 2010. She lives in Lagos, Nigeria, where she runs the annual Aké Arts and Book Festival. In 2017, she was named African Literary Person of the Year by Brittle Paper.

Titilola Atinuke Alexandrah Shoneyin was born in Ibadan, the capital of Oyo State, southwestern Nigeria, in 1974. She is the youngest of six children and the only girl. Her parents, Chief Tinuoye Shoneyin and Yetunde Shoneyin (née Okupe), are Remo indigenes from Ogun State.

Shoneyin’s work is significantly influenced by her life, notably providing material on polygamy for her debut novel; her maternal grandfather, Abraham Olayinka Okupe (18961976) was the traditional ruler of Iperu Remo and had five wives. He ascended the throne in 1938 and died in 1976.

At the age of six, she went to boarding school in the UK, attending Cargilfield School, Edinburgh; The Collegiate School, Winterbourne, Bristol, and Fettes Junior School in Edinburgh. Returning to Nigeria after her father was imprisoned by the then military government; she completed her secondary education at Abadina College. She later earned her BA (Hons) degree from Ogun State University in 1994/95.

Lola’s early writing consists mainly of poetry and short stories. Early examples of her work appeared in the Post Express in 1995, which features a short story about a Nigerian woman who leaves her husband for an Austrian woman. This story initiated dialogue about homosexuality within a Nigerian context.

Her first volume of poetry, So All the Time I was Sitting on an Egg, was published by Ovalonion House, Nigeria, in 1998. Shoneyin attended the renowned International Writing Program in Iowa, USA, in August 1999 and was also in that year a Distinguished Scholar at the University of St. Thomas (Minnesota).

Her second volume of poetry, Song of a Riverbird, was published in Nigeria (Ovalonion House) in 2002. While living in England, she obtained a teaching degree from London Metropolitan University in 2005.

Shoneyin completed her first novel in 2000. Her second novel, Harlot, received some interest, but the story of a young girl growing up in colonial Nigeria to make a fortune as a “Madame” remains unpublished. Shoneyin moved on to her third novel, The Secret Lives of Baba Segi’s Wives, which was published in 2010.

Cassava Republic Press, Nigeria, published Shoneyin’s third poetry collection, For the Love of Flight, in February 2010. Mayowa and the Masquerades, a children’s book, was also published by Cassava Republic, in July 2010.

She has also written for newspapers, including The Scotsman, The Guardian,[ and The Times on issues such as racism, Nigeria’s tradition of polygamous marriage, the Nigerian terrorist group Boko Haram and the elections of now President Muhammadu Buhari.

She is the founder and Director of Book Buzz Foundation, a non-governmental organisation established in 2012 for the promotion of arts and culture within local and global spaces. She co-founded Infusion, a popular monthly gathering for music, art and culture in Abuja, Nigeria. Shoneyin served as a judge of the 2018 Caine Prize for African Writing.