The Qatar 2022 World Cup:Knockout football fever brought to you by MSPORT 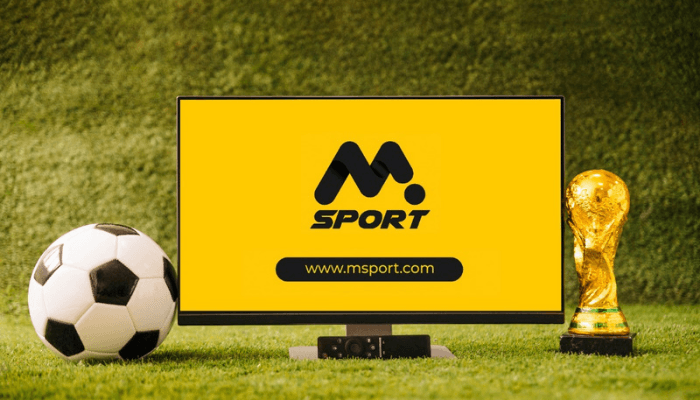 So far, the Qatar 2022 World Cup tournament has been thrilling, with shocking results more than ever in a World Cup. There have been surprises and stellar performances from most underdog nations from Africa and Asia who made it to the knockout stage.

Qatar, Canada, Ecuador, Germany, Costa Rica, Belgium, Iran, Wales, Mexico, Saudi Arabia, Tunisia, Denmark, Germany, Costa Rica, Ghana, and Uruguay have been eliminated from the tournament, while 16 other countries have advanced to the Round of 16 of the World Cup knockout stages. MSport is providing an update on all Qatar 2022 World Cup groups that have concluded, in addition to providing the best odds and promotions this World Cup season.

MSport Special Offer for The Qatar 2022 World Cup!
MSport wants you to enjoy the FIFA World Cup 2022 while enjoying the best odds and fantastic promotions on its betting platform.
Enjoy SuperOdds on all World cup matches to win big on MSport. You can snatch and share N500,000 Vouchers for every goal scored during the world. You can snatch this bonus in the Live Commentary section of the match on the MSport app. Not only that you can also partake in the MSport Qatar 2022 World Cup promotions to win N1,000,000 naira in daily ranking.

The more bets you place on the platform, the more points you earn to also win iPhone 14 in a lucky draw. Join MSport now to enjoy this bonus on www.msport.com to also get up to N500,000 on your first deposit.

Except for Belgium and Germany, most of the favorites have survived their groups, but it hasn’t been an easy ride. On day three, Saudi Arabia ranked absolute outsiders in the tournament, stunned Argentina.
Japan, not to be outdone, followed suit a day later, beating Germany despite falling behind to an early penalty, before repeating the comeback against Spain in the final game to win the group. To be fair, given the outcome of Group E, perhaps the biggest surprise was Costa Rica’s victory over Japan in their second game.

Belgium is out of the Qatar 2022 World Cup tournament after a vibrant Morocco performance exposed their creaking backline.

Netherlands & Senegal’s Qualification from Group A
Joining the list of countries that have qualified for the knockout stage is the Netherlands. In their first 2022 Qatar World Cup match, they were defeated by Senegal, drew with Ecuador, and won Qatar to advance to the knockout stage.

The Senegalese supporters were overjoyed when Senegal joined the league of the qualified national team after winning against Ecuador. The match ended in a 2-1 victory for Senegal.

England & USA’s Qualification from Group B
The list is not complete without England’s clear victory against Wales. The match between England 3- 0 Wales led to the qualification of the England National team to the Round of 16. The England national team is one of the strongest teams competing in the 2022 Qatar World Cup.

The United States of America national football team is one of the 16 national teams that have moved to the knockout stage. The victory they recorded during the match against Iran gained the national team an entrance into the round of 16.

Argentina And Poland’s Qualification from Group C
Argentina reclaimed first place in Group C with victories over Mexico and Poland after a shocking loss to Saudi Arabia in the Qatar 2022 World Cup opener. Argentina’s first appearance at the World Cup rocked the Qatar stadium with the national team’s defeat to Saudi Arabia. Argentina’s national team for the FIFA World Cup 2022 includes one of the greatest footballers in history.
Poland qualified for the round of 16 after finishing second in Group C with a win over Saudi Arabia, a draw with Mexico, and a loss to Argentina. Robert Lewandowski was moved to tears after scoring his first World Cup goal against Saudi Arabia.

France And Australia’s Qualification from Group D
France is the first country to qualify for the round of 16 of the Qatar 2022 World Cup tournaments. It is not surprising that France triumphed in the knockout stage after defeating Denmark on November 26th. France’s first match in the World Cup was a resounding defeat to Australia. France won the match 4-1 and went on to win Denmark and then lost to Tunisia in their last game of the group stage.

Australia qualified for the round of 16 after finishing second in Group D with 6 points from victories over Tunisia and Denmark. It is not surprising because this is the national team’s sixth FIFA World Cup appearance and their fifth in a row.

More Exciting Offers from MSport for The Qatar 2022 World Cup.
You thought MSport was done with the amazing offers? Of course not. Here is another one for the loyal bettors to enjoy during the Qatar World Cup 2022.

Japan And Spain’s Qualification from Group E
Japan advanced to the round of 16 after topping Group E with two stunning comeback victories over Germany and Spain, losing only to Costa Rica. This is their best FIFA World Cup result.
Spain, one of the tournament favorites, clinched a spot in the last 16 with a win against Costa Rica, a draw with Germany, and a loss to Japan.

Morocco And Croatia’s Qualification from Group F
Morocco topped Group F with victories over Canada and Belgium after a goalless draw with Croatia. This is the country’s best FIFA World Cup result ever, having previously reached the round of 16 only once in 1986. This is a thing of pride for Africans and the people of Morocco.

Croatia advanced to the round of 16 after drawing goalless with Morocco and Belgium and defeating Canada 4-1. With two goals in three matches, Andrej Kramaric has been an asset to the national team in the Qatar World Cup 2022.

Switzerland advanced to the 2022 World Cup knockout stages after defeating Serbia on the final day of group play. The Swiss national team needed a draw to qualify, but they won 3-2 to guarantee a spot in the knockout round. In Group G, they finished second to Brazil.

Portugal And South Korea’s Qualification from Group H
Portugal qualified for the knockout stage thanks to two goals from Bruno Fernandes. With players like Cristiano Ronaldo and Bruno Fernandes on a national team, there is a certain level of trust among Portuguese citizens and fans in the national team.

It appeared as though South Korea would be on their way out of the 2022 FIFA World Cup tournament until Son Heung-min made a pass to Hwang Hee-chan who scored in the 91st minute. Tears of joy flowed in the Qatar stadium because the qualification was indeed a miracle for the national team.

Round of 16: Netherlands schools USA, England tears Senegal apart
For all the promise that the USMNT provided in the group stages, they succumbed in the end to a straightforward defeat in which the Dutch thoroughly outclassed and outplayed the Americans. Despite scoring once, the USA posed little challenge to their opponents, who repeatedly outclassed the Stars and Stripes at the Khalifa International Stadium. The Dutch calmly bided their time before carving open the USA defense with forensic precision.

While the USA lick their wounds, the Dutch march triumphantly toward the quarter-finals where they will face mighty Argentina.
In the other Round of 16 matchups, England faced the mighty AFCON Champions, Senegal, but in the end, England’s precise crossing was the difference between the 2 teams. Henderson, Kane, and Saka were the scorers as Senegal’s weakness in preventing crosses caused mayhem whenever low crosses were put into their box, resulting in easy tap-ins for Henderson and Saka. Kane scored his first Qatar World Cup goal off a quick counter-attack. Senegal attacked valiantly but the gulf in class was too much in the end.

Round of 16: Argentina holds off plucky Australia to book their place in the Quarters, France shrug off Poland through the brilliant Mbappe
The form is temporary, but class is permanent. Messi produced a sublime leadership display on the pitch with an assured, mature performance, scoring one and being generally Messi-like in his vision and distribution, dictating the overall tempo of play to work through the Australians in the last third of the pitch to see off Australia. Australia fought hard but this was a hurdle too high for them in the end, a deflected goal scant consolation for their efforts. Argentina sets up a tasty match-up against the Netherlands in the Quarter Finals.

The other Round of 16 match-ups was a less knotty affair, France dominant throughout proceedings, and after a slow start and an early scare, grabbed the match by the scruff of the neck and Giroud broke the deadlock. Not to be outdone, Mbappe announced himself into the match as well as a serious contender for the Golden Boot by scoring 2 stunning goals. Dispatching Poland with relative ease, France now sits in wait for mighty England in what is another mouth-watering matchup in the Quarters.

Round of 16: Croatia defeats Japan on Penalty kicks to advance to the quarterfinals, and Brazil wins 4-1 over South Korea.
Croatia advanced to the 2022 World Cup quarterfinals after winning the first penalty shootout.
During the shootout, Japan missed three penalty kicks while Croatia only missed one.
Normal time ended in a 1-1 tie, prompting the penalty shootout. In extra time, neither team scored. In the last eight, Croatia will face Brazil.
Brazil made a huge statement in their quest for a spot in the Quarterfinals, destroying South Korea 4-1 in the round of 16. Brazil will now face Croatia.

Round of 16: Morocco advances to the quarter-finals after defeating Spain on penalties, and Portugal crushes Switzerland to majestically walk into the quarter-finals.
Morocco eliminated Spain from the 2022 World Cup in a penalty shootout. Spanish-born Achraf Hakimi scored the decisive spot-kick after Spain missed all three of their attempts after a 0-0 draw after 120 minutes. Morocco will face Portugal in the Quarterfinals.

Portugal defeated Switzerland 6-1 in the Round of 16 match, with Goncalo Ramos scoring a hat-trick and Pepe, Raphael Guerreiro, and Raphel Leo each scoring one goal. In the quarter-finals, Portugal will face Morocco.

THE ONE WAY TO QATAR MSPORT FOOTBALL CHALLENGE THAT BIRTHED A MILLIONAIRE.
On the 20th of November, young talented MSport fans gathered at the Campus Memorial Stadium, Igbosere Lagos Island to participate in a football challenge organized by MSport. The event themed One way to Qatar had over 200 MSport fans who registered to participate for the ground price of 1 million naira. After different stages which included, ball juggling, dribbling through obstacles, shooting the ball, and a 1 vs 1 battle, Friday Godsgift Chibuzor emerged as the winner. He went home with a whooping sum of 1 million naira. 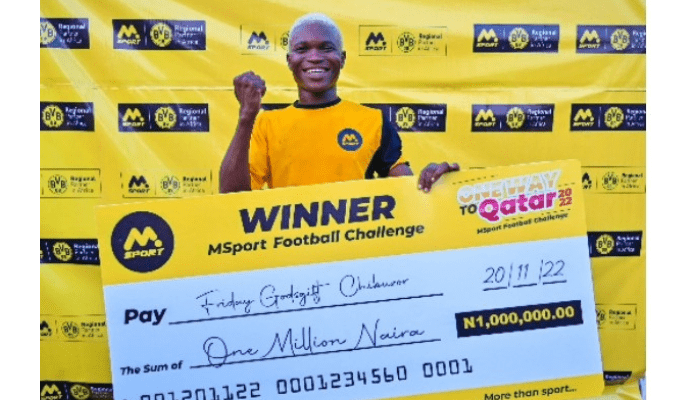 QUARTERFINALS MATCH FIXTURES
Croatia vs Brazil 09 Dec 16:00
Netherlands vs Argentina 09 Dec 20:00
England vs France 10 Dec 20:00
Morocco vs Portugal 10 Dec 16:00
What We Have Learnt So Far in The Group Stages (and Round of 16) Of The Qatar 2022 World Cup
No team won all their three group matches
Fewer goals than in previous editions of the FIFA World Cup, particularly in the first half: 2.5 goals per game is the lowest in the previous three World Cups, with only 36% coming in the first half.
Teams are passing more frequently: More passes are made per game in this tournament than in any other.
The FIFA World Cup has seen 525 additional stoppage time minutes. That’s nearly six additional games. Fans get their money’s worth.
Teams are taking fewer but higher-quality shots: 22.3 goals per game, but with the best World Cup conversion rate of 11.2%, despite a record low 8% of goals coming from outside the box.
We are now at the business end of the World Cup, and the matchups are getting more and more exciting. How would you play your bet on these matches?