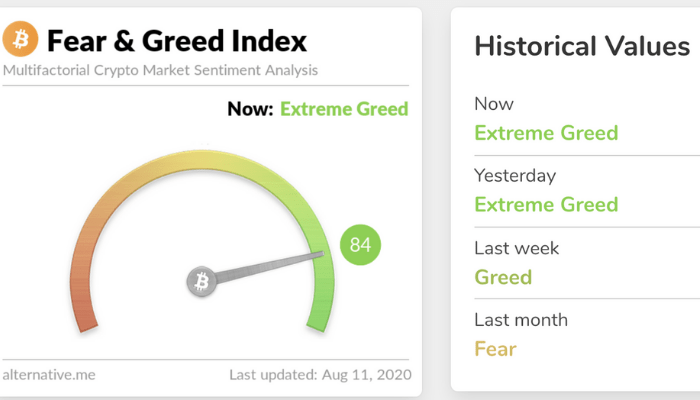 An often overlooked facet of overall market analysis is the impact sentiment can have on price action. This element is amplified in the cryptocurrency industry due to the asset class being predominantly a speculative batch of assets.

A tool, called the Crypto Market Fear and Greed Index, was developed solely to measure this critical factor. Following the recent crypto market rally, the same tool just reached the second-highest reading of extreme greed since its creation.

What does such an extreme level of greed in crypto market sentiment say about the current rally? And what does past data show about how the Fear and Greed Index correlates to corrections and other price action? PrimeXBT research has revealed compelling data that may shed some light on what to expect in the coming weeks ahead.

The asset class of cryptocurrencies is unlike any other financial asset in the world. There is often no company tied to each asset, no executive team at the helm, and no company revenue reports to consider. Fundamental analysis revolves around supply issuance, decentralization, use case, or the health of the underlying network.

Crypto assets often respond well to technical analysis, which is precisely why the market is suddenly on fire once again. Bitcoin broke through important resistance at $10,000 and through the top trend line of a multi-year triangle. The bullish breakout created a butterfly effect across the industry, prompting nearly every other cryptocurrency to see green.

Bitcoin has risen over 60% year-to-date and increased over 200% from its Black Thursday bottom. Profit-taking in Bitcoin flowed into major altcoins like Ethereum and XRP, then later into smaller cap altcoins that have since grown by thousands of percent in ROI.

The recent gains and powerful parabolic rallies in crypto assets have led to another critical factor peaking: greed. Weighing sentiment into any investment or trading strategy related to crypto assets is paramount to success, and part of getting a solid read on the overall market.

Some of the world’s greatest investors, including Warren Buffett and Baron Rothschild, advocate taking a contrarian stance when sentiment reaches an extreme on one side of the other. On the flip side of greed is fear. Buffett’s famous quote does an ideal job of summing up the concept.

According to the Crypto Market Fear and Greed Index, market sentiment has reached levels of extreme greed. Going by what Buffett and Rothschild suggest, it very well could be time to be fearful as greed reaches the second-highest level ever. 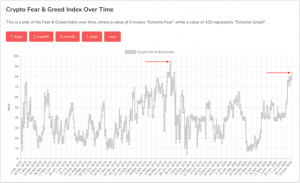 However, other well-known investors such as John Maynard Keynes – the “Warren Buffett of his day” warn that “markets can stay irrational longer than you can stay solvent.” This theory believes that even if markets do reach such extreme and irrational levels, it can stay that way for an extended period of time – perhaps a lot longer than investors are prepared for.

So which is it? Will it be Warren Buffet’s warning to be fearful now that the market is in extreme greed mode or to follow Keynes’s advice that irrational markets can stay that way a lot longer than anyone expects? PrimeXBT research sheds some light on these critical details.

PrimeXBT data reveals that during the 2018 bear market alone, when the Fear and Greed Index was first created, it acted as an extremely accurate tool to time tops and bottoms based on contrarian sentiment.

Comparing Bitcoin daily price charts from 2018 with data from the Fear and Greed Index, each high in fear or greed, resulted in a reversal.

During the worst of the bear market, Buffett’s advice rang true. However, after Bitcoin bottomed in 2018 when fear reached extremes once again, the Fear and Greed Index showed that markets truly can stay irrational longer than expected.

In 2019, after Bitcoin broke out from its bottom trading range, the crypto asset went on another parabolic rally. The asset rose from $3,200 to over $14,000, and along the way, stayed at extreme greed almost the entire time.

At the time, crypto investors were calling for new all-time highs in Bitcoin, demonstrating what irrational exuberance looked like. Instead, Bitcoin corrected and eventually fell back down to $3,800 on Black Thursday in early 2020.

At that time, fear peaked again, and remained there for some time. Bitcoin has once again rallied from below $4,000 to above $10,000, with a current peak of $12,000. Does the Fear and Greed Index imply that another phase of irrational market behavior will drive prices much higher before a correction happens, or is this a sign the top is already in, and a reversal is coming?

How To Stay Ahead Of Market Sentiment And Prepare For Anything

Data supports both scenarios, so being ready for anything is crucial to staying profitable in the current market confusion. With valuations rising driving sentiment to extreme greed, it is now time to at least be cautious.

PrimeXBT offers technical analysis tools so traders can stay one step ahead of any future market movements, and long and short positions so money can be made no matter which direction the market turns next.