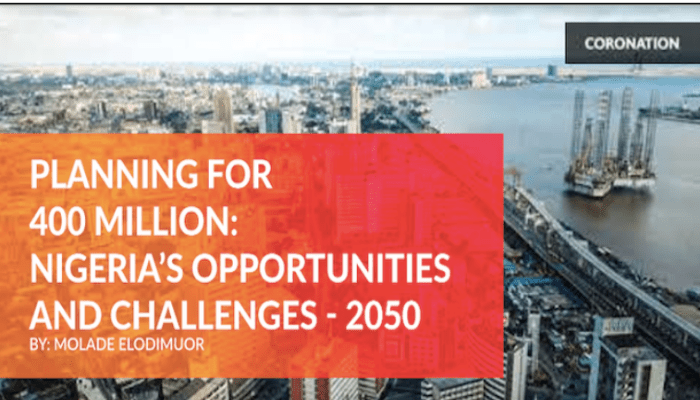 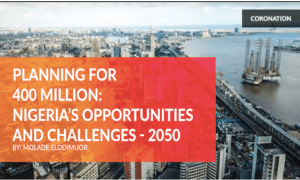 Nigeria – regarded as the largest economy in Africa and bustling with the promise of a young and enterprising populace with a median age of 18 years – is strategically poised for growth, although the African giant is struggling to take its righVul place on the world stage as it is heavily laden with deep infrastructural deﬁcits and a weak path to sustainable economic growth and development.

Nigeria stands out as the most populous country on the African continent, supported by the recent data from the African Development Bank (AfDB) which estimates that the country is home to over 201 million people, a stunning 64% growth from the 122 million recorded at the turn of the 21st century. As the demographic projections show that the total world population is expected to reach 8.6 billion by 2050, Africa will make up approximately 28% of that while Nigeria will represent c.17% of the continent’s population of 2.4 billion inhabitants in 29 years.

Hence, this premise begs the question “What value does a rising population unlock for an economy? And how can market players harness Nigeria’s growing population to build proﬁtable and sustainable businesses across various sectors and industries?’’

The starting point for ﬁnding answers to these questions is population analysis and its crucial role in guiding investment decisions.

Why is Population Analysis Important?

For Nigeria to cater to the needs of its present and future populace, a critical analysis of its current state is required and a road map towards the desired future must be developed. It will require the partnership and participation of both public and private sector players to breach the gap required to set the country on a path to sustainable growth and development.

Economists posit that a large and relatively young population presents two high-level opportunities for a country like Nigeria. Firstly, it provides a large market to support commercial acidifies, which is attractive, especially if the population has a relatively high per capita income. And secondly, it suggests the country has a large labour force to support production and other value creation activities, including operations in the manufacturing
and services industries. It is also worth noting that these factors inﬂuence investment decision processes by entrepreneurs and investors, and it is one of the key elements in favour of Nigeria as an investment destination of choice. 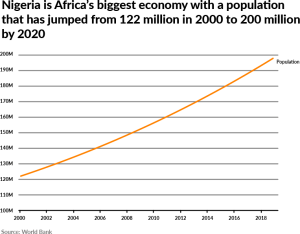 The Challenges of Nigeria’s Infrastructure Deﬁcient Worsens with Increased Population

Nigeria is due for massive investments in infrastructure to support its fast-growing population and emerging modern economy. The dearth of infrastructure across diﬀerent industries represents a major investment opportunity at a large scale for private investors and governments alike. An estimated USD 3 trillion is required over the next 30 years to bridge Nigeria’s infrastructure gap.

The country’s infrastructure deﬁcient cuts across various fundamental facilities and services including road and transportation, water, waste, power and energy, communications, aviation, etc. One critical industry with suboptimal national investments but signiﬁcant investment upside is the real estate industry, which represents 5.70% of the GDP according to the National Bureau of Statistics. Despite being one of the basic human needs, national housing is grossly underfunded, and consumers are in dire need of better residential property options.

A 2016 report by the Centre for Aﬀordable Housing Finance in Africa (CAHFA) showed that homeownership in Nigeria stood at 25% which is signiﬁcantly lower than the records of other African countries such as Kenya (73%), and South Africa (56%). While the government has committed billions of naira annually through the Federal Ministry of Housing to build new housing units, the pace of this development has been slow, and its impact is negligible.
In 2006, the government announced the plan to construct 1 million new housing units each year but CAHFA data reveals that housing construction has hovered around 100,000 annually, a signiﬁcant setback especially as urban population keeps rising. For private investors and entrepreneurs, this housing deﬁciency presents an investment opportunity. 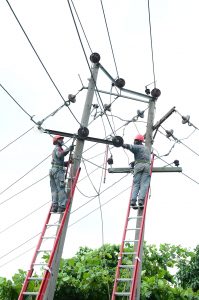 Similarly, Nigeria suﬀers from unstable power supply which continues to impact economic activities in the country. While there is a total installed power capacity of up to 12,000 megawatts, on average, currently, only around 4,000 megawatts of electricity is supplied to consumers, an abysmal ﬁgure considering that South Africa, a country with roughly 58 million people produces more than 50,000 megawatts of electricity to citizens and businesses. Nigeria’s delinquent power challenges is apparent in the collapse of the national grid. Within the ﬁrst four months of 2019, the national grid collapsed six times, aﬀecting transmission and ﬁnal distribution of electricity. Likewise, electricity revenue collection is also challenging. Distribution companies, which are the last mile for power delivery, have long decried the huge debt accrued by households and various enterprise customers. Therefore, ineﬃcient power generation and revenue generation are two big issues derailing stable electricity supply in Nigeria.
Both are key problems that must be ﬁxed to improve productivity in Africa’s biggest economy.

Additionally, transportation, education and healthcare are underserved segments of the Nigerian economy. According to GDP ﬁgures, the entire transport industry contributes less than 2% to the national economy; education accounts for 1.78%, while healthcare contributes just 0.62% to the GDP. All three industries have suﬀered decades of neglect and inconsistent government regulations which have led to low investor interests. Yet these sectors are crucial for future growth and development of Nigerians. For instance, each year, 1.6 million students write the mandatory Joint Admission Matriculation Board (JAMB) examination to enter tertiary institutions, but institutions have limited capacity and can only admit approx. 600,000 students during an admission cycle. Likewise, Nigerians are underserved in transportation and healthcare, with millions struggling to gain access to aﬀordable health services and suitable means of commuting within the country. These all represent opportunities for entrepreneurs and investors, and with a population explosion in major cities, the need for these services will only increase in the years to come. 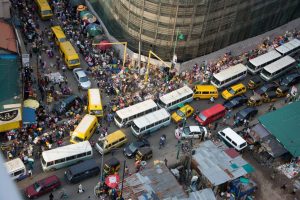 According to the National Bureau of Statistics (2020 report), the oil sector accounted for 8.16% of Nigeria’s GDP of $448 billion, however oil revenue has historically been the government’s primary source of funding. Unfortunately, over the last seven years, global oil demand has been unstable, causing prices to ﬂuctuate and the fortunes of Nigeria’s economy to dwindle. Unlike previous eras of oil price instability, the current crisis was inﬂuenced by greater oil production eﬃciency in the US and the rise of shale oil – an alternative to crude oil, as well as a major global shih towards clean and renewable energy. While oil producing countries like Nigeria are struggling to unfie their economic fortunes from the black gold, global oil demand landscape is changing forever due to these new trends and the move towards cleaner and more sustainable energy sources. 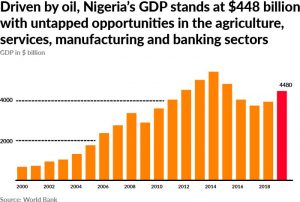 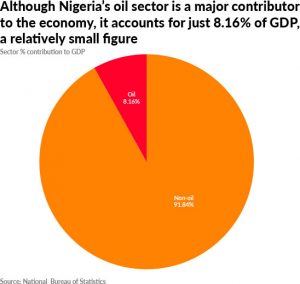 The good news is that Nigeria’s emerging economy is diverse and growing. From aggrotech to health-tech and logistics technology, the opportunities to harness and optimize new and existing industries through technology is compelling. These industries represent an opportunity for both investors and entrepreneurs to play their parts in rewriting of Nigeria’s economic story.

Over the last ﬁve years, the country’s tech ecosystem has been the toast of the continent as it has sprung a number of high growth start-ups with Pan-African expansion plans. At least three of the continent’s most recognised companies with valuations exceeding $1 billion are from Nigeria.

Most technological innovations have focused on the ﬁnancial services industry — personal banking, payments, wealth management, and consumer lending. This is further buttressed by Statistics by Enhancing Financial Innovation and Access (EFInA) which shows that 39.7% of Nigeria’s 99 million adults have a bank account and 1.3% of adults have access to credit from formal lenders.

In addition to this, according to the Centre for Financial Regulation and Inclusion (CENFRI), only 1.9% of Nigerian adults have insurance coverage, and the industry contributes barely 0.3% to the country’s GDP. Another estimate by Catalyst Fund, an investment company, claims “a measly 400,000” Nigerians had a mutual fund investment by March 2020, representing a 0.8% penetration rate. This suggests there are still opportunities to provide basic ﬁnancial services to Nigerians and improve access to existing product and service oﬀerings.

Given Nigeria’s sizeable population and its projected growth, the deﬁciencies represent both challenges and opportunities and the scale of both of these factors is on track to increase as the country’s population is set to double to 400 million by the year 2050 (29 years from now). It is therefore important to make these critical investments required today which will create value jobs and improve economic prosperity.

At Coronation Capital Limited, we believe that the fame to act is now, in order to capture the opportunities within the Nigerian market. As strategically planning for such a feat is crucial, we keenly focus on supporting and partnering with future-thinking stakeholders’ including entrepreneurs, institutions, and investors whose goals include making an entry or expanding their existing operations through the deployment of proven strategies that enhance success and provides them with an enviable stake in Nigeria’s future fortunes.

Though the challenges may be daunting and enormous, the opportunities still remain bountiful. The success of our country over the next few decades will require the sacriﬁces of all stakeholders – institutional, public, private, internal, and external alike to take on the charge to ensure that the future of Nigeria surpasses the great tales of its past glory.