NASS will not be a rubber stamp under me – Lawan 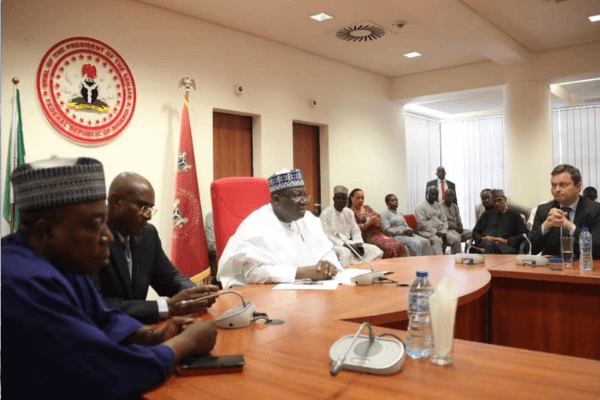 Senate President Ahmed Lawan Wednesday, reiterated that the National Assembly will not be a rubber stamp under his administration.

Lawan who led the newly leadership of the Senate to visit Vice President Yemi Osinbajo, said the visit provided both the Legislature and the Executive an opportunity to also discuss the type of Senate and of course the National Assembly that should be expected in the Ninth National Assembly.

He noted that the new National Assembly, received a bi-partisan mandate from across the parties.

“The PDP, the YPP voted for us and we believe that this is the time and opportunity for us to consolidate the kind of support that we received across the political parties that we received in the National Assembly. We believe that we must remain united in the National Assembly.
He promised a focused Legislature, adding that “ We must remain focused for us to be able to deliver those legislative interventions that would be necessary for good governance in the country.

“It is our desire also to ensure that whoever is appointed by the executive arm of government performs his or her functions optimally.

Also speaking against the backdrop of fears that the parliament under his leadership will be a rubber stamp, Lawan said the parliament is not a primary school or a secondary school where you gave a headmaster or principal that will dictate to his students.

“Parliament is an aggregate or an assemblage of people that have equal status.

“Being elected as Senate President does not mean that I’m the boss of the other Senators. I’m simply to coordinate and aggregate views and lead debates.

He promised to respect the will of majority , adding that “ there will be nothing like rubber stamp. So far I have never seen a National Assembly that had a rubber stamp leadership and I have been around for twenty years to that.”

“But on thing I must tell you is that while the desire to remain sufficiently on our track, we will ensure that oversight function is properly carried out but we will cooperate fully and give total support to the administration to ensure that there is good governance.

“There is no need for any fear that we will be a rubber stamp National Assembly. Perhaps and probably with time Nigeria will come to see that what we desire and what will happen by the grace of God will be a working relationship that endear the entire administration and government to the people if Nigeria. So there is no cause for alarm.

Ondo, Edo guber: What direct primary may mean for Akeredolu,…