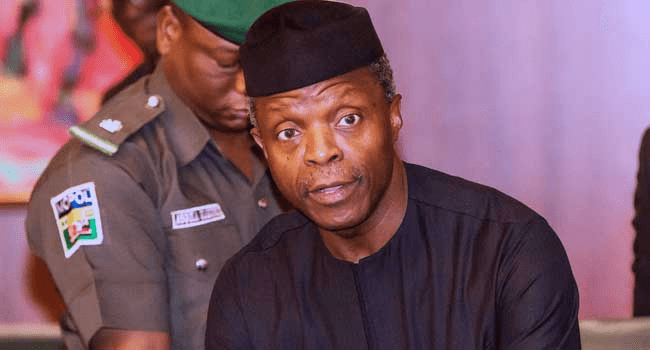 Another landmark in Nigeria’s quest to revamp the rail transportation sector and restore the lost glory of the country’s rail sector was over the weekend; Saturday recorded when the Vice president Yemi Osinbajo (SAN)  performed the ground breaking ceremony of the Kajola Wagon Assembly Plant in Kajola, Ogun State.

The journey to last Saturday’s historic event is coming more than two years after the ground breaking ceremony performed by the vice president on March 17, 2017 perform the ground breaking to mark the construction of the Lagos-Ibadan standard gauge railway line which is the second segment of the Lagos-Kano standard gauge railway system with an extension to the Lagos port complex, Apapa.

The historic event which took-off by 11:00 am at the Ebute-Metta railway terminal, Lagos was attended by important dignitaries cutting across the spectrum of the society including sate governors, captains of industry and stakeholders in the transportation sector with the minister of Transportation, Chibuike Rotimi Amaechi as the chief host.
In his address, vice president Yemi Osinbajo said the plant which is a private investment to be undertaken by Messers CCECC, is central in the production of rolling stock needed for the railway modernization program being implemented by this administration.
While describing the ground breaking ceremony as not just another event,  he said it is a historic turning point.
According to him, ”For us, the railway is not only an alternative and comfortable mode of travel, it holds the master key to transforming commerce in Nigeria and across the continent. By linking our ports to rail lines and now, building the rolling stock locally, import and export business within, into and out of Africa’s largest market will never be the same”.
When completed, it is expected that the plant would produce some parts of the wagons for the Lagos-Ibadan and Abuja-Kaduna rail lines, but also for the central rail lines and to satisfy the needs of other rail operators within the West-African sub-region.
The country’s number two citizen said that citing of the plant in the country and the commitment to hiring Nigerians and Nigerian businesses affirms the President Buhari’s directives in Executive Order 5 on prioritizing Nigerians and Nigerian businesses in the innovation, production, and procurement of engineering projects and services.
”I have a message also from the President and this is to CCECC which is that we expect that you move on very quickly to the next phase of this project which is assembly and construction of coaches and locomotives. This for us will be a significant breakthrough and we look forward to hearing from you as quickly as possible when this will come into operation”.
The plant is expected to offer an important platform for engineers, technicians, artisans and other professionals to gain the specialized skills required for the production and maintenance of rolling stock.
This will invariably produce spin-off businesses in the region of operation and across the country wherever rail networks are in existence. The plant is expected to generate about 5,000 direct and indirect jobs.
After completing the Abuja-Kaduna Railway project in July 2016, this administration commenced construction works on the Lagos-Ibadan Railway modernization project in March 2017, following which, we initiated the rehabilitation and completion of the abandoned Itakpe- Ajaokuta-Warri rail line which was started over three decades ago.
Last month, the federal government signed an agreement with China Railway Construction Company International to construct the Itakpe – Ajaokuta rail line which will be extended from Itakpe to Abuja
through Baro Inland Water Port in Niger State with a branch line to Lokoja in Kogi State. This rail line will link into the new Warri seaport being constructed under the agreement.
The vice president said that the government optimizing the Lagos-Ibadan rail modernization project by extending it to the Apapa Port, the nation’s busiest port for the efficient movement of cargo from the port to various destinations.
This will expedite import/export flows, decongest the ports, and depressurize our roads in the process. Also, we are putting all mechanisms in place to achieve the swift completion of the Ibadan Inland Dry Port which will off-take containers and cargoes from Apapa port through the Lagos-Ibadan rail line.
He expressed appreciation to the support shown by the leadership of the host communities and other relevant federal and state government stakeholders in the implementation of Federal projects.
”It is imperative that our host communities continue to support government efforts by effectively cooperating with the contractors in safeguarding and protecting these lasting investments so that we can ensure that all intended objectives and mutual benefits are attained”. Osinbajo said.
He also commended the Minister of Transportation; Rotimi Amaechi or Chibuike Amaechi for the very hard work and commitment he has demonstrated from the inception of our rail modernization project. And also to the Chinese government, particularly the investor, CCECC Nigeria Limited for the significant and strategic investment.
Share FacebookTwitterLinkedinWhatsAppEmail

Our office, online platforms remain open to customers during…