It’s a NO to rape and NO means NO!

Share
It’s becoming ‘regular’ in recent times. Back to back, the news of rape floods our timelines on social media and in the dailies. How did we get here? We are battling a pandemic called COVID-19; we are not even done with it…and this? How do you move from a killer virus to rape? It’s like someone having a cut on his finger and you are preparing the person for chemotherapy…what is the connection?
COVID-19, and next is rape? How is rape a lesson learnt from the ongoing pandemic? How do some barbarous individuals in this nation, after spending weeks at home (for our own safety), suddenly begin to think rape is the next thing on the agenda? Even if there are states where COVID-19 hasn’t been detected, when something happens in a state, the expected reaction is that, as a family in the same nation, you should be bothered about what your fellow ‘family’ members are going through in other states. This is so painful to write about, nevertheless, I must.
Let me take you through the unpalatable platter of rape cases I have heard and seen in recent times (only because it was made open), making me daily wonder why it is hard for some people to understand that being a girl/woman is a blessing and not a ‘project’ for misuse by some ill-informed individuals.
Vera Uwaila Omozuwa, the 100 level student of University of Benin, was raped and murdered when she went to church to read. How do you perpetuate such appalling act and seal it up with the gruesome killing by smashing a fire extinguisher on her head? The sight of the cut and her lifeless body with blood stains all around, is not one to be forgotten in a jiffy. I am still wondering the audacity to perpetuate such ferocious acts in a ‘sanctuary’…The effrontery is baffling!
Then, another shocking tale, the rape of Jennifer, the young girl, by 11 men. How 11 grown men felt it was okay to have sex with a minor is inexplicable. What is it about a child that is sexually beguiling? How do the words ‘child’ and ‘sex’ even dare sit on the same sentence? It is in the news that the pedophiles have been arrested but how many more are out there? When will they be apprehended?
Watching Bello Barakat’s mother narrating the ordeal that led to her daughter’s death cannot be properly expressed in words. When she said “How can you as a mother be alive to bury your child?” my heart ached. Barakat was a student of IAR&T, Oluyole, Ibadan. Her home was attacked by armed robbers. Report has it that she resisted the rape and was stabbed to death.
Still in Ibadan, Adejumoke Oluwaseun’s video that I watched was certainly another heart breaker. The man she married (after she lost her husband to the cold hands of death), who brought her to Ibadan, was sleeping with her 9 year old child. Now wait for the shocker. He had been sleeping with the child right from when the child was 6.
Frustrated by the situation, Jumoke decided to speak up. Though late, but glad she found her voice. Jumoke confronted him about it. His nonchalant and contemptible attitude towards Jumoke and her child is aggrieving and inhumane. He sent them out of the house, but I am convinced that help will come her way soon and justice will be served to the reprehensible perpetuator.
That is not all. I was in pain listening to this 4 year old girl, sitting on her mother’s laps, slowly and painfully narrating what her teacher did to her as press men and women asked her to share her story. “He wide my legs, he covered my mouth and asked me to shut up…he will put me on his laps…it’s uncle…his name is Elias Oyeke…I am in nursery 1” She spoke slowly and in fear, her description was heart wrenching, but she tried her best to say what her strength could permit, and each time she struggled to say a word, I felt pain all over me…”
Her mother, Ayele Esther, stated that every time she went to school to pick her up, her daughter was the last in class and she would be sweating. She said she began to suspect something was wrong because she was often a fast writer at home. When she took her home, she observed that her vagina was ruthlessly bruised. After persuasion, the little girl opened up and told her that every time she was dropped in school, Elias would take her to the back of the school when the others were playing, and would take advantage of her, she narrated in details as a child could and it was such a horrible thing to watch and hear. I will spare you the gory details that followed. 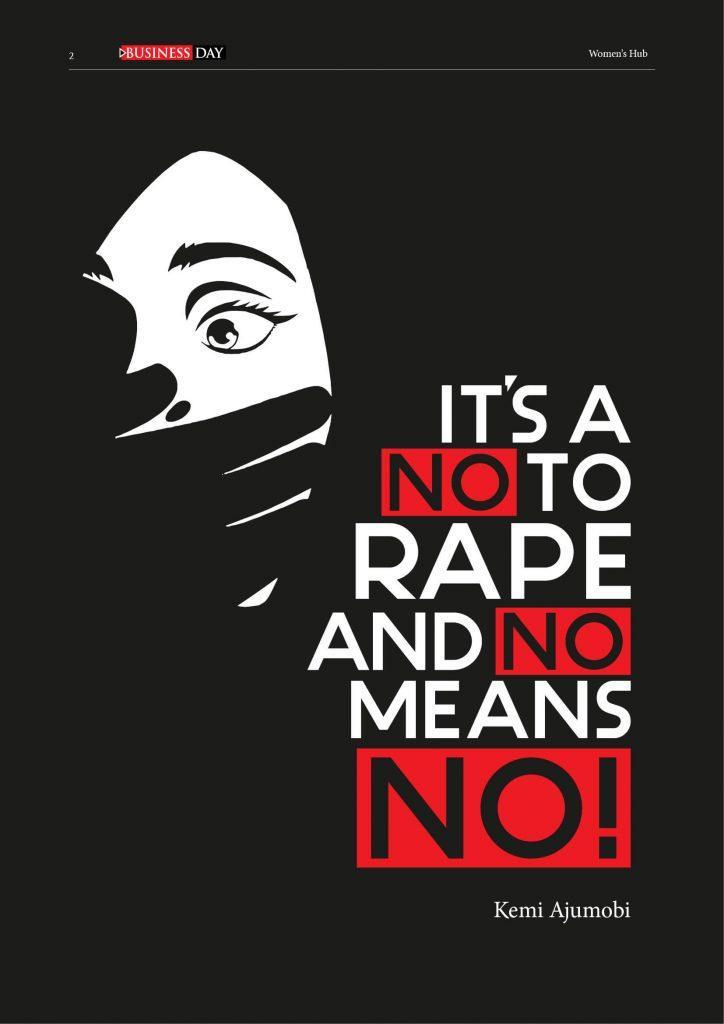 Furthermore, with uttermost disgust, I watched Babatunde Adeyeye, the final year student of LASU ‘passionately’ kissing a minor who happens to be his ‘younger sister’. Watching him make a video of ‘apology’ saying he never knew it would go viral, and promising he would never do it again was indeed sore to the eyes. I am wondering what else is going on that we do not know. If the video didn’t go viral, would he be ‘remorseful?’ what else has he done that we do not know? How far has he gone that we cannot tell?
Also, The Kogi state’s Commissioner for Water Resources, Abdulmumuni Danga was accused of assaulting and raping Elizabeth Oyeniyi. She made the horrid reveal saying Danga assaulted her over a Facebook post she made about him on her page on the 29th of March. What was her offence? She alleged she published a post requesting the Commissioner to be generous to his immediate family, same way he does with the public. Elizabeth said this triggered the Commissioner who she alleged organized some men to take her to his residence where he scourged her and later raped her. He is reported to be in police custody.
The occurrences are endless. I mentioned these ones to give you an idea of what is going on, of how rape cases are escalating by the day in Nigeria and how we cannot afford to be silent.
Similarly, have you observed the pattern in recent times? Victims are beginning to speak up and in some of those cases, expected actions against the evil perpetuators are being taken. Sadly, only those who have gone through it and are alive, and found courage to do so can truly speak up. Many are not alive to tell their story or share their side of the narrative.
One other thing happening is that, past rape occurrences are currently coming up again. The abused is finding her voice and making it known with proof. They are telling their stories and the populace is helping them shed awareness on their plight in the hands of the evil perpetuators. Cases that seemed forgotten because the abuser is ‘connected’ are coming up again. It tells me that no matter how long you attempt to hide the truth, it cannot stay in the dark for long. One day, it will burst out and consequences of taking advantage of the vulnerable will be reaped.
Speaking of consequences, a man has recently been sentenced to death in Kaduna for murder. He raped a 2 year old girl to death. He was sentenced by Justice Kabir Dabo of the Kaduna State High court sitting in Dogarawa Sabon Gari in Zaria. The pedophile admitted he rapped the child for 40 minutes which led to her death.
Worthy of mention is that this happened in 2015 but justice, though delayed, gave way in 2020. We aren’t happy it took that long but like I said, no matter how long the truth seems buried, it will one day see the light of day.
According to Section 31 (3) (a) of the Child’s Rights Act 2003, the age of consent is 18.  It states that “Where a person is charged with an offence (of unlawful sexual relations with a child) under this section (31 of the same act), it is immaterial that the offender believed the person to be of or above the age of eighteen years.”
There have been some reports that it is 11 years but before you debunk it as fake and untrue, how do you explain the raping of children going on back-to-back in recent times? So the Acts says 18 on paper, my question is, in reality, in the Nigeria that you and I live in, is it the case? Isn’t it far from a lie and surely the truth?
In section 7 of the Sexual Offences Bill, having sexual intercourse with anyone between the ages of 0 to 18 is punishable by life imprisonment. So, let’s agree that the legal age to have consensual sex is 18, let’s talk about consent. Even if the person is 18 and above, and she says “No” it must be respected. When a person says “No” and you go ahead, it is rape. Do you even know that if a married woman isn’t in the mood to have sex with her husband and he insists, and ends up having his way, it is rape? Do you know that even if two consenting adults agree to have sex and one party says “stop” somewhere along the line, and the person continues, it is rape?
Consent means permission for something to happen or agreement to do something. Meaning, if one party isn’t in agreement at whatever stage they are in the ‘activity’, once she says “STOP”, it is what it is: STOP!
We are ‘dealing’ with 18 right? We have agreed that ‘officially’, in Nigeria, the consenting age is from 18 right? Good! But do you know that one in four girls are sexually violated before 18? Do you know that 31.4 percent of girls who had their first ever sexual encounter was through rape? Do you know that 6 out of 10 children in Nigeria experience sexual, emotional or physical abuse before 18? So, to get rid of this horrendous behavior, the sexual offence bill must be enforced, State laws must be reviewed because some of these men hide under it to commit their atrocities.
I was happy learning that finger prints on the fire extinguisher used on Vera helped give away the culprits, I am however hoping that such measure will be prominent in investigations in Nigeria because I haven’t heard that in a long while. This had made perpetuators walk free but again like I said earlier; it is no longer going to be the norm.
Recently, the President of the Senate, Senator Ahmad pushed for tauter consequences for rape in Nigeria which he believes will deter perpetuators. I conclude with a quote from him “We have to save our future, and these girls and women are the future of this nation”
Share

Collaborations key to succeeding in Nigeria’s music industry – Don VS

Glo Expands its 22X Recharge value to All Prepaid Customers

A look at Duke Asidere’s paintings