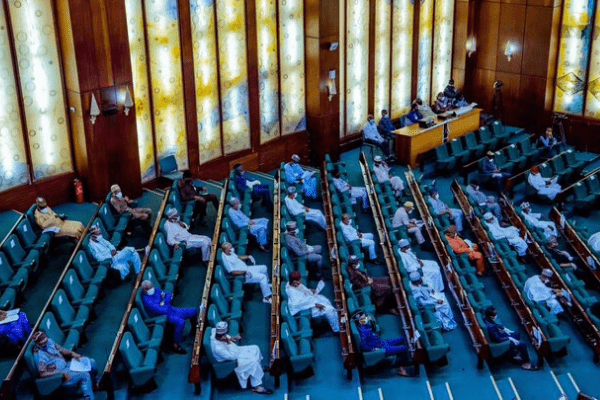 The House of Representatives on Tuesday rejected responses by the Accountant General of the Federation (AGF), Ahmed Idris to the extra-budgetary expenditure of over N1.819 trillion in the 2014 fiscal year.

According to the lawmakers, the Accountant General’s responses failed to address various concerns raised in the audit queries issued by the office of the Auditor General of the Federation.

The extra-budgetary expenditure includes N54 billion borrowed funds for the staff of PHCN in 2014 and N745.4 billion payment allegedly approved by former President Goodluck Jonathan from the Natural Resources Fund account, N594.3 billion loan withdrawn from the Stabilisation Fund which belongs to the three tiers of government.

Others are the N73.5 billion paid in 2014, out of which N36.4 billion was released to the National Security Adviser (NSA) for rehabilitation and construction of the dam; N31.3 billion paid to an account which a political appointee was a signatory and additional sum of N2.8 billion paid for the purchase of hand sanitizers.

The Auditor-General had queried the Accountant General’s office over the sum of N200.9 billion deducted from the Federal Government’s share of the Federation Account, out of the total sum of N797.9 billion reported in the 2014 financial statement, showing the variance of N52.7 billion.

Responding to the various audit queries issued by the Auditor General of the Federation in 2014 financial year, Ahmed disclosed that the N54 billion was borrowed fund for the staff of the defunct Power Holding Company of Nigeria (PHCN) in 2014 for payment of staff pension.

He said: “For example, I know that when the issue ASUU occurred in the past and the government wanted to pay the outstanding allowances, they went and borrowed money from TETFUND.

“I am not saying the N54 billion was borrowed from Pension money. But I want to assure the parliament that we will provide the source of that money and other information required from us.”

The Accountant General who explained that the 2014 financial closing balance was not remitted to the Consolidated Revenue Fund (CRF), argued that: “it is third party money deducted from a source such as union dues and taxes meant for states.

“That money does not belong to the federal government and that is why it was not remitted to the CRF so that we will not run into trouble when it is time to pay.”

Ahmed also told the Committee on Public Accounts that the delay in the passage of the national budget and extension of the capital budget beyond the financial year made it impossible for his office to prepare the financial statement of the government for audit as required by extant financial year.

On the allegation bothering on financial sabotage, the Accountant General said: “We are for the Federation and cannot sabotage the Federation. We are doing our best to ensure things are done normally.”

He stated that the delay in getting a transcript of accounts from various Ministries, Department, and Agencies (MDAs) occasioned by the attitude of staff from the MDAs or outright lack of capacity was also partly responsible for the delay in preparing government’s annual statement of accounts.

“If there is no rendition of account from the MDAs, there is no way the account can be prepared. Sometimes, we threaten to withhold allocation to them before they send in their transcript, and sometimes, we have to send our staff to assist them. But going forward, we are deploying ICT which will now be used,” he argued.

Idris however explained that his office was working on a draft law that will amend the existing law stating a specific period for the submission of annual financial statements to the Auditor General, adding that the draft law will soon be submitted to the National Assembly.

He argued that the approval for the release of the N745 billion was for 23 special accounts, adding “there was no specific request for approvals.”

The Accountant General explained that the Police Reward Fund account which was operational up to 2012, suddenly became dormant.

The House Committee on Public Accounts said it was not satisfied by the explanation of the Accountant General that the closing balance that was not returned to the Consolidated Revenue Fund of the Federation was not government money, but the money belongs to other agencies such as unions and taxes meant for other states.

In its ruling, the Committee resolved to summon the Comptroller General of Nigeria Customs Service (NCS), Hameed Ali over the 10% cocoa levy account, as well as Governor of Central Bank of Nigeria (CBN), Godwin Emefiele over the Police Reward Fund which was dormant after 2012.

The Committee Chairman, Wole Oke who frowned at the development, said the legislature will have no option to demand the refund of the money if the Accountant General fails to provide the authority letter from the President.

Reps threaten to issue warrants of arrest on DPR, NAPIMS, Chevron, others